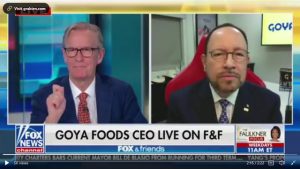 CEO of Goya Foods, Robert Unanue did not pull any punches during an interview he had on Friday with Fox News, coming out hard against Democrats, saying they “weaponized” the coronavirus pandemic in order to force a shutdown of the economy to help them make political gains.

You know what? He’s not wrong.

“You were called to the White House to talk about the coronavirus and the response and you went, and then political Left tried to cancel you with essentially a boycott. But then it turned around, people were supporting you with a buycott and I understand Goya Foods has just finished your biggest, most successful year ever,” Fox News host Steve Doocy said.

“Yes,” Unanue responded. “You know, the problem is it’s a political year and they weaponized coronavirus unfortunately to shutdown this economy.

“The worst thing we can do is shutdown our economy, kill our spirit,” Unanue continued. “You know, we need a reason to get up in the morning: God, family, work. And they’re taking away our spirit. They’re taking away our ability to work. They essentially declared martial law, I believe, in this country, shutting everything down. It’s the worst thing we could have done just for political gain. I think it’s criminal. I think it’s immoral. To shutdown this economy for this basically political reasons and, you know, we’re one nation under God. We’re not one nation under Twitter. We’re not one nation under big media, or under central government.”

What the world needs now is not love, sweet love, but more CEOs in the country to take a bold stand for conservative values like this man has done and let the left know we are on to the stunts they keep trying to pull.

At some point, business owners are going to have to choose between obeying ridiculous government restrictions or watching their companies and their livelihoods collapse. It’s really that simple.

The radical left is not giving us much of a choice right now, especially with the threat of Biden forcing a national shutdown for the first 100 days of his incoming administration.

We don’t know if he’ll follow through on that, but we have to hope he doesn’t. Otherwise, civil disobedience might be the only option left.