The Government’s Plan: Make It too Safe to Use 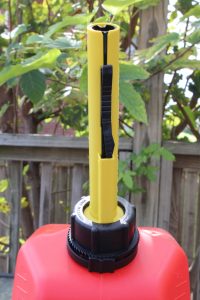 A few weeks ago, a friend of mine borrowed my lawnmower and gas can. The lawnmower came back a couple of weeks later, and that was fine. Unexpected travel kept me away from home and out of the yard for almost a month. Yard work is one of my favorite ways to relax, so when it was finally time to tame the raging beast that my lawn had become, I was ready for the challenge.

I put on my straw hat, fired up the weedeater, and rode into battle. I had the weeds on the run, crabgrass and dandelions shrinking away in fear, and the whole lawn seemed to hold its breath when I pulled the mower out of the garage and checked it over.The gas tank was empty. No worries, though. I had just filled the can before sending it off with my friend, and his yard is pretty small. Except…I had no gas can.

By the time I got back to the grass, my lawn would have grown reinforcements, and there were no guarantees of my safe return once I ventured beyond the fence. Picking up a new gas can seemed like the best plan. Well, just color me stupid. I had forgotten the government’s need to make even the simplest things either too complicated or too dangerous to use, all in the name of safety.

The fault was all mine. Just a few weeks earlier, out in the yard once again, I got in a fight with my new, super-safetified electric hedge trimmers. It might not be entirely accurate to report that the trimmers won, but the doc at the walk-in clinic looked at my finger and said, “You know, I love jigsaw puzzles, but only when I have all the pieces.” He thought he was a lot funnier than I did.

I got careless with the electric clippers. That’s the long and short of it. Still, I’ve been trimming hedges for more than three decades and never had anything like that happen. Of course, this was the first set of electric clippers I’ve used that didn’t have a trigger lock on it. That’s what keeps the blades moving even if you need all your fingers to hold and maneuver the unit. Apparently, trigger locks are too dangerous for the average American to use. All I know is I never got my butt kicked by a hedge trimmer until the gub’mint (that’s government for those of you not blessed enough to come from the South) made them safer so I wouldn’t hurt myself. 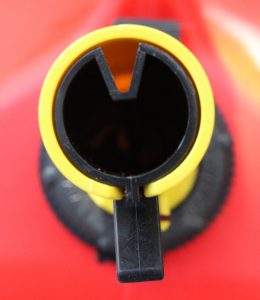 What kind of idgit thinks a closed off spout is a good idea?

So, knowing this bit of information, I made the trip to Lowe’s in ignorant bliss, even if I was a bit peeved to be spending extra money and giving my lawn a chance to rest and marshal its forces against me. Then I found out that electric hedge clippers wasn’t the only thing the gub’mint made safe. They had to go and screw up gas cans, too!

A few years ago, California – yep, when an explanation starts out with California you know what direction things are headed in – adopted a new set of guidelines concerning gasoline and diesel fuel. It seems the vent holes on regular old gas cans let out too much vapor to be safe, and the old spouts, the ones that actually worked, allowed too much spillage, wasting gas and polluting the water table.

California’s answer to these world-ending problems was a spout that keeps any gasoline from ever leaving the can. The whole thing worked so well that the Obama government decided to adopt the regulations nationwide. Of course, Americans all said, “Well, hell, forget the grass (or the snow in the driveway, or the generator providing electricity). Let’s just grab a beer and enjoy our clean air.”

Or not. YouTube has seven pages worth of videos about how to make a new gas can work. That means a lot of people are altering the spout, making it even more dangerous to both the user and the environment than the old one ever was. Even worse, a lot of people who are way too impatient to figure out an impossible gas spout are also way too impatient to watch a YouTube video, especially on something this inane. Anybody who doubts they’re just taking the spout off altogether and pouring straight from the can is a damn fool, just like the people who came up with this abomination.

Fortunately for me, my friend had actually returned my old gas can. It was just on the other side of the garage, covered by lawn bags. That’s a big relief. After my experience with the safetified hedge trimmers, that safetified gas can was looking pretty dangerous. Can you imagine what these same people could do with healthcare? Might be time to hire a yard crew!