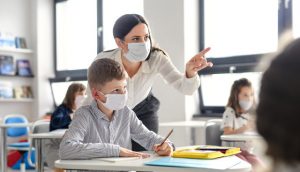 The Oklahoma City Public Schools board voted unanimously last Wednesday to boot six teachers who refused to submit to the district’s mask mandate for local schools.

Then, on Friday, Oklahoma Gov. Kevin Stitt published a video where he slammed Oklahoma Public Schools for having the “audacity” to fire these teachers during the midst of a staffing shortage over refusing to wear face masks.

“Oklahoma City public school district had the audacity to fire six talented teachers,” the Republican governor went on to say in a video he posted up Friday. “They were fired because they wouldn’t follow an illegal mask mandate issued by their superintendent. This is preposterous, especially in a time when talented teachers are needed more than ever.”

“Let me be clear: This is about a school district not following state law. This isn’t a debate about masks.These teachers even said they’d be willing to come back to class and wear a mask. But the superintendent Sean McDaniel wanted to fire them to make a point,” he went on to state.

School district officials announced on Aug. 17 that six employees were placed on administrative leave for refusing to comply with the face mask requirement.

The Board of Education conducted due process hearings for the six OKCPS (Oklahoma City Public Schools) educators. “Since these employees continue to refuse to follow a reasonable directive over a law that is unsettled, OKCPS board members voted unanimously to move forward with termination of these six teachers,” according to Oklahoma News 4 KFOR.

An attorney representing five out of the six teachers held a press conference last Thursday, announcing that they would be fighting back against the district. The lawyer explained that this is not a political matter or a fight against masks, but is about the rule of law.

“Stitt and the teachers’ lawyer say McDaniel broke Senate Bill 658, which prohibits school boards from mandating masks, COVID-19 vaccinations, or vaccine passports,” the report stated, going on to add, “The superintendent maintains that the law does not apply because he’s not part of the board.”

The governor then implored McDaniel to give the six teachers their positions back, or for other superintendents to provide offers of employment for them.

“I hope that Sean McDaniel can look the teachers that he fired in the eye and say that he wears a mask everywhere he goes,” Stitt urged. “It’s not too late to fix this. Sean McDaniel should bring these teachers back to the classroom as soon as possible. If not, I’m calling on other superintendents across the state to do the right thing. Do what’s best for your students, hire these talented teachers in your district.”