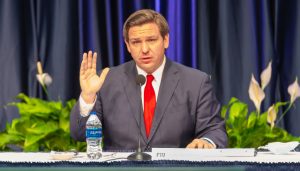 Florida Gov. Ron DeSantis, a Republican, tore into what he referred to the “rise of corporate wokeness” last week, going on to issue a warning to employers about “caving into the mob” in order to score some political points.

DeSantis delivered a talk last Thursday during the annual meeting of the Florida Chamber of Commerce, going on to tell top executives that he will take action against any employer who chooses to use corporate “power” to push a specific ideology.

“If you’re using your power as a corporation, and you’re leveraging that to try to advance any ideology, I think it’s very dangerous for this country and I’m not just gonna sit idly by,” DeSantis went on tosa, according to a report from the Tampa Bay Times. “Do you want to be more of a political actor or more of a business actor?”

“Don’t ever think that caving to the mob is going to save your bacon,” DeSantis said sternly. “That’s just going to cause them to come back more.”

“You know, if you do it, you are also going to come by some people on the other side, like me, who are going to say well, wait a minute, if you’re going to criticize what we’re doing I may criticize some of the things you are doing,” he warned. “I may look under the hood and not like some things. … I got a podium. I got cameras that will follow me around. Maybe I’ll go talk about that a little bit. And so, I think it’s something that’s very damaging,” he said.

DeSantis said that GOP voters have turned against corporations as more and more large businesses push progressive ideas and ideology.

“I think corporate America has lost so much [support]. … Most [Republican voters] hate corporations now,” the governor added. “They hate them because they see these big companies that are really kowtowing to a very elite ideology and an ideology that’s not reflective of the vast vast majority of the country.”

On Friday, DeSantis called a special session of the Florida legislature for November 15 to pass laws against businesses requiring their employees to get vaccinated. DeSantis’ push is a direct response to President Joe Biden’s executive order mandating that federal contractors be vaccinated and large companies mandate their employees either be vaccinated or tested weekly for COVID-19.

“The Biden administration has undertaken, or threatened to undertake, extraordinary efforts to coerce injections of the COVID-19 vaccine into Americans who otherwise would be unwilling to receive the vaccine for reasons of health, pregnancy, religious belief (including sincerely held moral or ethical beliefs) and prior infection,” DeSantis’ announcement stated, according to a new report from CBS Miami.

“Forced vaccinations of Americans will sow further distrust in government and in corporate America,” DeSantis continued.

Just the day prior, DeSantis sued the federal government over Biden’s vaccine mandate.

“The federal government is exceeding [its] power and it is important for us to take a stand because in Florida we believe these are choices based on individual circumstances,” DeSantis said.