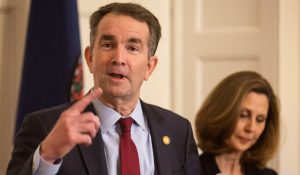 I don’t know how, y’all, but somehow Ralph Northam is still the governor of Virginia.

So, in Richmond he remains, signing away Virginian rights with every stroke of his pen.

After declaring a state of emergency on Wednesday, the Democrat praised NRA members for remaining peaceful during a press conference amid the intense backlash he has faced for threatening to ban and confiscate lawfully owned firearms.

“Virginia is always open for citizens of our state to meet with the elected leaders peacefully,” Northam began, according to The Daily Wire. “That remains the case this coming Monday. Hundreds of Virginians do this everyday.”

“Most recently, earlier this week, the NRA hosted its annual lobby day. Hundreds of Virginians participated, and the day passed without incident. That is what peaceful events look like,” he continued. “I thank the NRA for hosting a peaceful event. Now, I call on the Virginia Citizens Defense League and its members to follow the NRA’s example, and make your event a peaceful display too as you have done in the past. Please do not dishonor Virginia or your cause.”

I don’t think I’d be talking about dishonoring Virginia, the state whose motto is literally a death threat to tyrants, if I were Ralph Northam.

The NRA responded to Northam’s remarks in a statement from NRA Institute for Legislative Action executive director Jason Ouimet: “If Virginia Gov. Northam sincerely respects the efforts of the NRA and its 5 million members, he can demonstrate that respect by not infringing our rights.”

“If Virginia Gov. Northam sincerely respects the efforts of the NRA and its 5 million members, he can demonstrate that respect by not infringing our rights.” – Jason Ouimet, executive director, @NRAILA #valeg

Virginians shouldn’t wait around for their government to do its job in defending their Constitutional rights. How far are you prepared to go in defense of your liberty?