GOP Member Winsome Fears Becomes First Black Woman To Be Elected To Statewide Office In VA: ‘The Cavalry Has Arrived’ 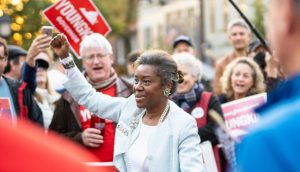 Virginia Lt. Governor-elect Winsome Sears, who is a Republican, was all smiles Tuesday evening as she took the podium to express how happy she is about the opportunities she has been given here in the United States when she came to our great nation at the age of six from Jamaica, stating she’s living the “American Dream.”

Sears, who served her country in the U.S. Marine Corps, won the election Tuesday evening to become the first black woman to be elected to statewide office in the state’s history.

“I say to you, there are some who want to divide us and we must not let that happen,” she continued. “They would like us to believe we are back in 1963, when my father came. We can live wherever we want, we can eat where we want, we own the water fountains. We have had a black president elected not once but twice and here I am living proof. In case you haven’t noticed, I am black and I have been black all my life.”

“But that’s not what this is about, what we are going to do is we are going to now be about the business of the Commonwealth,” she added. “We have things to attend to, we are going to fully fund our historically black colleges and universities. You’re gonna hear from your governor-elect Glenn Younkin. And he’s got a day one plan that I’m already tired about, I don’t know how we’re gonna make it to day two. But he’s going to make sure we keep more of our money in our pockets because he’s going to get rid of all kinds of taxes. We’re gonna have safer neighborhoods, safer communities, and our children are going to get a good education because education lifted my father out of poverty, education lifted me out of poverty, education will lift us all out of poverty because we must have marketable skills so that our children can not just survive, but they will thrive, and they recreate generational wealth. That’s what this is about.”

Sears finished her speech by proclaiming that the “cavalry has arrived” to help citizens of the state of Virginia get the state turned around after so long of being under Democrat control.

"Education will lift us all out of poverty."

Lt. Governor-elect of Virginia Winsome Spears: "We're going to have safer neighborhoods, safer communities, and our children are going to get a good education." #VoteForAmerica2021. pic.twitter.com/81yZu9NtrV