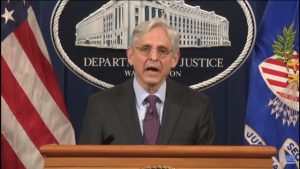 Republicans on the House Judiciary Committee have officially launched an investigation into the National School Boards Association Wednesday, requesting any and all documents and communications that have happened between the association, the White House, and the Justice Department.

If you listen real close, you can probably audibly hear the sound of the sweat leaking off the brow of liberals in the Biden administration as the walls continue to close in all around them for these various scandals all exploding at once.

The deadline for documents is Nov. 10 as Republicans on the committee will investigate the paper trail that led to the NSBA’s open letter to President Joe Biden that spurred Attorney General Merrick Garland to mobilize the FBI and U.S. prosecutors to potentially investigate and prosecute local school board protests.

“We are investigating the troubling attempts by the Department of Justice and the White House to use the heavy hand of federal law enforcement to target concerned parents at local school board meetings and chill their protected First Amendment activity,” the letter led by ranking member Jim Jordan, R-Ohio, went on to say.

“Because you are the officers of the National School Boards Association’s (NSBA) board of directors, which exercises ‘supervision, control, and direction of the affairs of the Association,’ we respectfully request your assistance with our investigation,” it continued.

The NSBA sent an open letter Sept. 29 to Biden requesting help from the federal government with concerned parents voicing their opinions at school board meetings. The NSBA letter stated that “malice, violence, and threats” against school officials “could be the equivalent of a form of domestic terrorism or hate crimes.'”

Just days later, Garland sent a memo to get the FBI and U.S. attorneys together to talk about how the Justice Department can investigate and prosecute those who protest at school board meetings.

“The Biden administration seemingly relied upon the NSBA letter — which it coordinated in advance with the NSBA — as justification to unleash the full weight of the federal law enforcement apparatus upon America’s parents,” Jordan’s letter, which was signed by 19 House GOP members, said.

Attorney General Garland, of course, has denied that the intent of the memorandum he sent out was to threaten parents or to put their First Amendment rights on ice. The NSBA board of directors actually issued an apology just last week for the “domestic terrorism” allegation they made in the original open letter that was sent off to the president that sparked this whole mess in the first place.