GOP Congresswoman Says Putin Is Using ‘Energy As A Weapon’ With Both Ukraine, Europe 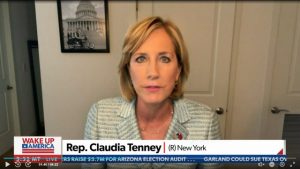 According to Republican Congresswoman Claudia Tenney, Russian President Vladimir Putin is now using “energy as a weapon” in Europe during a time when President Joe Biden and his administration is currently engaging in what she referred to as a “wrongheaded policy” that’s actually making the U.S. less energy independent.

“Putin is putting all his ducks in a row so he doesn’t have to use any kind of force,” the New York Republican went on to say during a chat on Newsmax’s “National Report.” “He’s using aggression by having troops around. He’s also using energy as a weapon. He’s hoping that Nord Stream 2 [pipeline] comes through.”

Meanwhile, President Joe Biden’s solution is to meet with Qatar about obtaining liquified natural gas, which many in Europe are dependent on and which is what Putin is using as leverage, said Tenney.

The United States, the European Union, and Germany are talking about “backing out of energy,” said Tenney.

“While Biden supports more liquefied natural gas coming from Qatar, he is shutting down the Keystone pipeline, which made our country less energy independent,” said the congresswoman. “We’re not exporting our fuel. We’re not growing our economy. We have high gas prices and inflation and a lot of that is caused by transportation costs and the cost of gasoline and fuel, and it’s a wrongheaded policy.”

Meanwhile, the United States has reportedly prepared a list of Russian elites to target with economic sanctions, including people who are close to Putin, but Tenney said it “doesn’t look likely” that the international banking community and others that are dependent on Russia will go along with them.

“Why aren’t we projecting strength?” she continued. “Why aren’t we building up our energy supplies and making sure that we are making partnerships in Europe and are being able to export to Europe our clean gas and our clean fuel?”

And it might be very difficult to get the U.N. to go along with sanctions due to the veto power held by both Russia and China, Tenney pointed out.

“They’re going to take advantage of President Biden as he continues to sort of fumble along on these international and domestic issues,” the congresswoman said, going on to add that she is pushing hard for democracy when it comes to Russia and Ukraine.

“I think the last thing that Europe and U. S taxpayers want is another war, especially in Europe, especially over Ukraine,” Tenney stated. “Our southern border is one of the most dangerous borders in the world right now.

“Two million [migrants] have come across. We have fentanyl. We have human trafficking. We have a complete disaster. They can talk a lot in the U. N., but they’re not necessarily going to get anywhere,” the congresswoman said.

“Let’s hope some of our partners in the U.N. will accept diplomacy and will put pressure on Putin and we can deter any kind of, you know, aggression or any kind of military action in the Ukrainian region,” Tenney concluded.