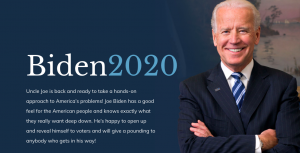 Have you ever come across so much nonsense and garbage on the internet that you want to clap your laptop shut and toss it into the street? Moments like that are simply unavoidable as news headlines grow increasingly depressing and heathen after heathen is given a platform, often free of charge, to spout all manner of silliness on the internet.

Well, folks, this isn’t one of those moments.

The internet, for all its faults, has given us a gift: a Joe Biden 2020 campaign parody site. And it’s glorious. Absolutely glorious.

When the weary conservative web-surfer visits JoeBiden.info, they’re sure to perk right up. Take a look:

“Uncle Joe is back and ready to take a hands-on approach to America’s problems!”

A hands-on approach. Oh my word, y’all. I am slain. But there’s more. So much more.

Joe Biden has a good feel for the American people and knows exactly what they really want deep down. He’s happy to open up and reveal himself to voters and will give a pounding to anybody who gets in his way!

And that’s just the landing page, y’all. Keep scrolling, and you’ll find an array of GIF images pushing Creepy Uncle Joe’s handsy antics with women and children—something the Dem establishment would rather excuse or ignore—right out into the open.

But wait, there’s so much more. A series of Joe’s most embarrassing quotes and votes, videos, and the icing on the cake: evidence of “Ukranian collusion”.

Guys, they even have t-shirts!

What could possibly be better than such a brilliant lampoon? The fact that the spoof site is massively outperforming Biden’s actual campaign site in Google search rankings. It’s amazing.

According to CNBC, Google users have reported not being able to find Uncle Joe’s actual website anywhere on the first page of results after searching for “Joe Biden website”. At the time of this writing, JoeBiden.info remains the first non-sponsored search result.

The site’s creator remains anonymous, though inquiries submitted through the site’s contact form by CNBC were met with the assurance that the site is not funded “by any candidate, committee, organization, or PAC.”

The site owner described their political stance as being “closest to a libertarian.” The person also said they are an American citizen and that they have not been contacted by any candidate or organization about the viral site.

Yet another enterprising individual purchased the JoeBiden.org domain name and pointed it to this WhiteHouse.gov list of President Trump’s accomplishments.

If Biden is going to rely on the internet in any capacity during his 2020 campaign, it looks like he’s got an uphill battle ahead of him. Good.