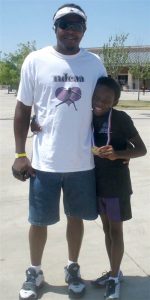 Charles Brockman III, shown when he was 7 with his father.

In a very touching story told to the Today Show one young man’s special tweet is garnering the attention of hundreds of thousands people and reminding us all what is truly important.

Charles Brockman III shared a tweet that quickly went viral. He honored his father in a heartfelt post showing side-by-side photos of the both of them during significant milestones.

From the first day of kindergarten to college move in. Thank you dad. pic.twitter.com/IpbudBIgdp

“From the first day of kindergarten to college move in. Thank you dad,” Brockman wrote.

Both photos were taken by his mother, and reflect the Texas family’s tradition of accompanying young Brockman, now 17, to school at the beginning of each year.

Brockman’s parents are with him this week for freshman orientation as he prepares to begin classes at Mississippi State University, where he plans to study broadcast journalism and communication.

“I’ve been truly blessed to have my dad, and my mom, always with me to provide support in everything I do,” the only child told TODAY.

“Sometimes fathers don’t get enough credit so I just had to pay it forward to him and thank him for all the years he’s been there for me,” he said.

Charles Brockman III, shown when he was 7 with his father.

His parents, Sherry and Charles Brockman Jr., said they have been caught off-guard by all the attention on their family — but they’re not surprised by their son’s expression of appreciation.

“At track meets, a lot of times I’ve seen parents go up to their kids or sons and be told, ‘Don’t touch me. Don’t hug me in public.’ And he hugs me. We tell each other we love each other all the time,” said Brockman’s father. “I’m so proud of him. He’s a really good kid, a really good student.”

What a great young man!