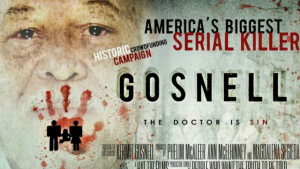 Over the last few decades, the progressive left has dominated the cinema arena of the culture war, but a handful of conservative creators have been hitting back, hard.

Film is one of the great American art forms, and it’s great to see determined filmmakers use the medium to tell some of the most important and controversial stories of our time.

“Gosnell” tells the story of America’s worst serial killers, that many haven’t even heard of. It was made using entirely crowdsourced funds, and, after facing an uphill legal battle, has finally landed itself a distributor and a national release date.

Gosnell producers told The Hollywood Reporter that they’ve inked a deal with GVN Releasing after hosting a series of single theater showings this past year.

Filmmakers and executive producers Anne McElhinney and Phelim McAlver made the movie with only $2.3 million dollars, raised entirely on Indigogo. The film chronicles the rise and eventual capture of Kermit Gosnell, who considered himself a Pennsylvania abortion provider, but was, in reality, a demented, brutal killer.

Gosnell is serving a life sentence for murdering three infants — born alive during his barbaric procedures — and one of his adult patients in his Philadelphia house of horrors.

The film, which began production after Gosnell’s trial concluded in 2014, stars Dean Cain “as the lead detective who pursued the case of Kermit Gosnell,” THR reports, and was directed by “Justified” star Nick Searcy, who also plays a role in the film.

While the actions of Gosnell are unthinkably evil, the filmmakers worked hard not to make the content too graphic to avoid an “R” rating. This is the opposite of what most Hollywood filmmakers go for, who fill their films full of profanity and gore because “R” movies typically perform better at the box office.

Instead, the “Gosnell” filmmakers chose rather to leave the horrors of Gosnell’s crimes to “the theater of the mind.”

Daily Wire explains that “The film was almost released in 2017, but judge Jeffery Minehart, the judge who presided over Gosnell’s trial, sued to stop the film’s release, apparently fearing he was portrayed as part of the ‘liberal corrupt government’ that the film argues ignored Gosnell’s crimes out of fear of political impact. Minehart also accused producers of ‘shamelessly exploiting for profit the morally divisive issue of abortion.'”

“Gosnell: The Trial of America’s Biggest Serial Killer” will be released in theatres on October 12, 2018. GVN will also release the film on DVD and streaming services.