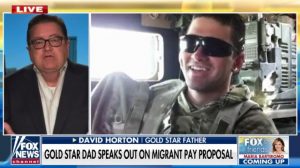 A Gold Star dad put President Joe Biden on full blast over a supposed plan to pay illegal immigrants that were separated at the U.S. border while Donald Trump was in the White House up to a whopping $450,000 each.

This incredibly large payout estimate rivals what some Gold Star families get after their loved one dies while serving his or her country in the military.

David Horton, the Gold State father in question, stated on Sunday that it’s “an outrage” and “completely disrespectful” for the president’s administration to possibly pay illegal immigrants who broke our laws to come into our country more than the families of those who gave their lives as a sacrifice for our liberty.

“I think it’s another – yet another insult … against our military families and Gold Star families and veterans,” Horton went on to say during an interview with “Fox & Friends.” “It’s just another another slap in the face … It’s completely disrespectful.”

Horton’s son Christopher died while serving in Afghanistan, which was recently flipped to the Taliban’s control after Biden executed a bungled withdrawal.

According to a report from Fox News, Horton’s son Christopher died while serving in Afghanistan, which was recently flipped to the Taliban’s control after Biden executed a bungled withdrawal.”

“They’ve broken the law coming in on our borders and didn’t compare that with someone, a patriot like my son, who gave his all on the battlefield of Afghanistan,” Horton stated passionately.

“I just, I am outraged,” the father went on to say. “I think this is, you know, you just wonder, where is the outcry against some of these policies that are just there? Unbelievable to me.”

Just last week, the Wall Street Journal reported “The U.S. Departments of Justice, Homeland Security, and Health and Human Services are considering payments that could amount to close to $1 million a family, though the final numbers could shift. Most of the families that crossed the border illegally from Mexico to seek asylum in the U.S. included one parent and one child.”

“Biden wants to pay illegal immigrants $450,000 for their hardship while breaking our laws. For perspective, if a service member is killed in action, their next of kin gets an insurance payment of $400,000. Let that sink in,” Rep. Dan Crenshaw, a Texas Republican, stated in a post on Twitter.

Biden wants to pay illegal immigrants $450,000 for their hardship while breaking our laws.

For perspective, if a service member is killed in action, their next of kin gets an insurance payment of $400,000.

Let that sink in. https://t.co/J3kuhDhyD5

“Promising tens of thousands of dollars to those who unlawfully entered the United States would not only reward criminal behavior, but it would surely send a message to the world that our borders are open, and or rule of law will not be enforced. Compare this hefty compensation sum [$450,000] to the 2019 average median American household annual income of $68,703,” the letter read. “Furthermore, compare it to the maximum payout from a SGLI life insurance policy for military members, which is $400,000. The idea that we would give illegal foreigners who broke the law a check that exceeds the amount that our government supplies to our valiant and heroic Gold Star Families is shameful, reprehensible, and morally indignant.”