GET OFF! 83 year old grandpa tosses suspect off his roof (WATCH) 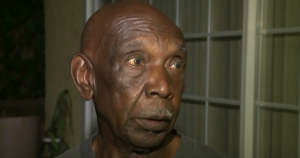 Lol!  Grandpa took matters into his own hands!

La Puente, CA – 83-year-old grandfather Wilford Burgess got tired of waiting for the police to end a standoff with a man on his roof, so he went up and handled it personally. Video of the incident was captured (video below.)

The incident occurred on Tuesday, September 12 about 6:34 AM, according to The Los Angeles Daily News, when someone called police to report that he or she was being followed near Nelson and Orange Avenues.

When police arrived, they saw a man jumping from roof to roof.

The 83-year-old man was not having it. When the suspect jumped on his roof Burgess grabbed a ladder and went up to confront the man.

You can see from the video below that perhaps crime is not a great career choice for this punk who was tossed off the roof easily by this grandfather.

“I tell everybody, ‘Just because you’re old, that don’t mean you got to sit down. As long as you’re able to move, move,’” Wilford Burgess told ABC 7.