Georgia Teen Literally Drives Through A Chick-fil-A Restaurant, Their Response Is Brilliant 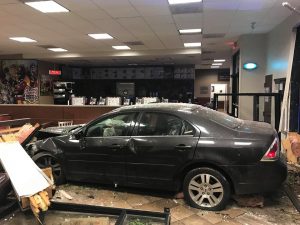 The day I stop singing the praises of Chick-fil-A’s company culture, there had better be a little paper tag around my toe.

To be clear, I don’t mean their food. I live in New York, and folks up here still think the fabled chicken sandwiches and waffle fries “taste like hate,” and I’m too lazy to drive to the nearest location. Even during my stint as a Virginian, the closest chicken joint was Bojangles (ugh). The one time I ever actually ordered something off the Chick-fil-A menu, it was a salad, and I forgot it on the roof of my car and drove away without ever taking a bite.

So, until the bright, shining day I’m able to sink my teeth into some of their food, I’m perfectly content to cheer Chick-fil-A on from the sidelines as I share story after story of their kindness to their communities and their resilience in the face of leftist thought-policing.

In this edition, I’d like to give a shout-out to the Chick-fil-A of Athens, Georgia (home to some of the best music on the face of this earth, as a side note) who took it like a champ when a teenager drove through their restaurant.

No, literally through it. She drove into the gosh-darn dining room.

A teenage suspect and her passenger slammed their stolen vehicle into the dining room of the restaurant early on Tuesday morning, according to local police.

Praise the Lord, it was well before the restaurant actually opened, so the staff was out of the way and no guests were seated in the demolished dining area.

According to Fox News:

Neither teenager was reportedly injured during the incident. At least one worker was in the building at the time, but they were also reportedly unharmed.

Now, we all know and love Chick-fil-A for refusing to let the squawking of the totalitarian left get them down, but their commendable fortitude really shone in their ability to handle getting hit by an ever-lovin’ car.

No bitterness, no whining, just pure class and a hilarious response:

A car drove thru one of the @ChickfilA’s in my hometown and they’re really handling it in the best way possible. 😂 📸: @accfire pic.twitter.com/9Rpj35D1P3

Oh, my word. That is just brilliant.

Hopefully, I’ll summon the desire to make the pilgrimage up to the nearest Chick-fil-A one of these days. When I do, I’ll do my best not to smash into the place.