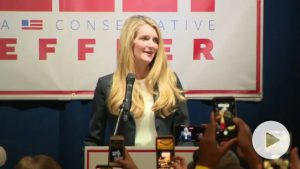 While the majority for the Senate is up for grabs, the twin runoff elections in the state of Georgia are heating up big time as a new ad from GOP Sen. Kelly Loeffler takes a big shot at her Democratic challenger Raphael Warnock as being “too extreme for Georgia.”

For Warnock, who is a pastor that preaches in the pulpit at Ebenezer Baptist Church, where MLK once preached a sermon, this is just the beginning of the assaults sure to come his way.

With the GOP retaining their seats in Alaska and North Carolina this week, the party currently controls the Senate 50-48. That means the Democrats must win both of Georgia’s runoff elections to make it a 50-50 Senate, in which Vice President-elect Kamala Harris would be the tie-breaking vote, giving her party a razor-thin majority in the chamber.

The other runoff in the Peach State pits Republican Sen. David Perdue against Democratic challenger Jon Ossoff. Perdue edged out Ossoff by roughly 87,000 votes, but failed to crack 50%, forcing a runoff.

The stakes in Georgia’s runoffs couldn’t be higher: These two elections will determine whether the GOP holds on to its majority in the Senate or if the Democrats will control both houses of Congress as well as the White House.

In a commercial that was released statewide last week, Warnock acknowledges that political attacks are coming.

Get ready Georgia. The negative ads against us are coming.

But that won’t stop us from fighting for a better future for Georgians and focusing on the issues that matter. pic.twitter.com/VN0YIA02MG

Loeffler’s campaign then shot back with a campaign video of their own on Tuesday.

🚨 NEW VIDEO @ReverendWarnock wants you to know he eats pizza with a fork & knife.

Here’s what he doesn’t want you to know. #gapol #gasen pic.twitter.com/WCdOBFs4rd

Warnock also has ties to radical anti-Semitic pastor Jeremiah Wright, who once said that America deserved the attack that happened on 9/11. That’s enough to earn a “no thanks” from me. How about you, Georgia?

It’s imperative Republicans keep the Senate. We need to ensure that if the election does not break Trump’s way and Biden ends up in office, he is essentially stalled from being able to implement his agenda.