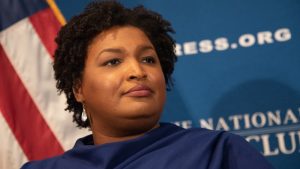 Georgia Secretary of State Brad Raffensperger has now launched an official investigation into several different groups, including one that was founded by former Georgia gubernatorial candidate Stacey Abrams.

What are they being investigated for?

For apparently “aggressively” seeking to register “ineligible, out-of-state, or deceased voters” before the two Senate runoff races due to take place in January.

That’s not shady at all, right?

Raffensperger’s office on Wednesday said the investigations are into groups including America Votes, Vote Forward and The New Georgia Project — which was founded by Abrams and previously chaired by Democratic Senate candidate Raphael Warnock.

Raffensperger for weeks has issued warnings against efforts to register individuals who are ineligible to vote in Georgia’s runoff elections or to encourage people to come to Georgia with the sole purpose of casting ballots.

“I have issued clear warnings several times to groups and individuals working to undermine the integrity of elections in Georgia through false and fraudulent registrations,” Raffensperger said in a statement Wednesday. “The security of Georgia’s elections is of the utmost importance.”

On Wednesday, Raffensperger said that his office has “received specific evidence that these groups have solicited voter registrations from ineligible individuals who have passed away or live out of state.”

He went on to promise that he would “investigate these claims thoroughly and take action against anyone attempting to undermine our elections.”

And yet, we’re told over and over again by radical leftists that there isn’t any voter fraud happening, that Joe Biden won the presidential election fair and square.

If folks like Abrams and her group were willing to play dirty tricks to win Senate races, what makes you think they didn’t do the same thing to take the White House?