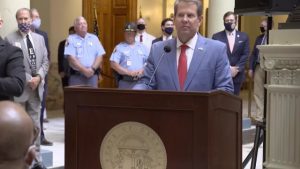 Georgia’s GOP Gov. Brian Kemp is now calling for the state to conduct a signature audit of election results. The call was made during an interview Kemp did with Fox News, in which he stated that some of the things that were alleged during the Georgia Senate Government Oversight Committee hearing were “concerning.”

Isn’t that what a lot of folks have been saying for the last month or so? About time someone finally started listening.

“You know, I’ve called early on for a signature audit, obviously the secretary of state, per the laws and the Constitution would have to order that; he has not done that,” Kemp said. “I think it should be done. I think, especially with what we saw today, it raises more questions. There needs to be transparency on that. I would again call for that, and I think in the next 24 hours hopefully we’ll see a lot more from the hearings that the legislature had today and we’ll be able to look and see what the next steps are.”

Kemp slammed attorney Lin Wood, an alleged Trump supporter who has an extensive history supporting Democrats, for encouraging people to not vote in the upcoming Senate runoff elections.

“It’s like Lin Wood saying today, urging the people not to go vote in this election — all that is gonna do is give the Democrats everything they want,” Kemp said. “It’s gonna give the radicals everything they want. This is literally the firewall. So, I think we all have to pull together and figure out what have we got to do to assure people that their vote’s gonna count. I believe that it will; that’s why I’m working so hard for David and Kelly, and I’m going to continue to do that.”

It’s critical for incidents of voter fraud to be investigated. We have more at stake than just a presidential election. The future of our entire way of life hinges on whether or not we the people can freely and fairly make our voices heard at the ballot box.

That is a critical component to ensuring the continuation of the liberty we enjoy every single day.

And, it’s not like this is the first election where fraud has been a concern. Every time we have an election shady stuff happens. It just seems like it might be happening on a larger scale this time around.