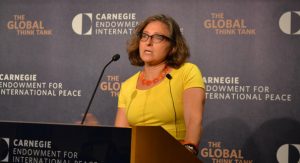 Everyone’s in a tizzy over this whole Kavanaugh thing. Emotions are running high, I get it! Right or left, I think we all need to let off some steam and chill out.

We all have different ways of chilling out, of course. I personally like to put down my phone, pick up a good book, and forget it’s 2018 for an hour or so. Maybe have a beer (I know Kavanaugh would approve.)

This Georgetown professor apparently likes to advocate for the violent murder and dismemberment of fellow human beings based on their skin color, party affiliation, and gender.

Ok, again, I get that we’re all pretty stressed out, but this seems just a tad dramatic to me, don’t you think?

Not to mention, oh I don’t know, even borderline illegal? Aren’t these the people always talking about “hate speech”? Isn’t this hate speech? Does hate speech really mellow anyone out?

Enough speculation…here’s what Georgetown University professor Christine Fair said in a now-deleted, according to The Daily Wire:

.@Georgetown professor calls for the white men on the Senate Judiciary Committee to be castrated and their bodies fed to pigs.https://t.co/E5auCKoORC pic.twitter.com/iRIGIPAHrZ

But not for college professors! They’re in the clear.

“The views of faculty members expressed in their private capacities are their own and not the views of the University. Our policy does not prohibit speech based on the person presenting ideas or the content of those ideas, even when those ideas may be difficult, controversial or objectionable,” University spokesman Matt Hill told Western Journal by email.

Hill added, “While faculty members may exercise freedom of speech, we expect that their classrooms and interaction with students be free of bias and geared toward thoughtful, respectful dialogue.”

Now, maybe I’m being a bit nit-picky, but it seems to me someone with this much hate in her heart would have an easy time having a conversation free of bias anywhere, let alone in a college classroom.

The Daily Wire tends to agree she is very much biased:

Tellingly, Fair describes herself as an “inter-sectional feminist, pitbull apostle, scotch devotee, nontheist, resister” in her Twitter bio, though her account is no longer accessible on the site. Her cover photo fittingly read, “DON’T GRAB MY P****.”

“There is a war going on against women and you, and your despicable herd of so-called journalists seeking to protect male privilege and shame women for our victimization or our rage are complicit in this war,'” Fair told Campus Reform about her racist and sexist tweet.

Again, this seems like a fantastic “unbiased” woman to have in the classroom shaping young minds.

One of the fine, distinguished professors raising up the next generation of leaders, ladies and gentlemen…with the full support of her university faculty.