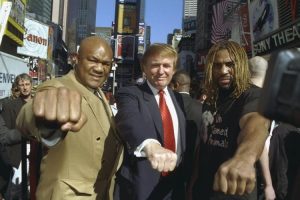 The former heavyweight champion boxer and grill salesman slammed Kaepernick and Durant on the “Offended America” podcast for not being patriotic, and lauded President Trump’s performance as commander-in-chief.

“(Kaepernick and Durant) haven’t been brought up with people who were patriotic to even point them in the right direction,” Foreman stated, referencing Kaepernick’s National Anthem protests and Durant’s refusal to visit the White House. 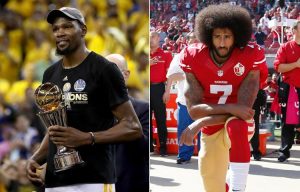 “Some of them are trying to make a point, it’s like look at me, I’m trying to say something. You gotta respect that, too,” he continued.

Foreman also explained how many people died to allow for the privilege of reciting the National Anthem.

When asked about Durant’s recent comments about not visiting the White House, he told a story about how he doesn’t have a photo with Richard Nixon, because he was “ignorant” and wouldn’t support to the candidate over his plans to end the Job Corps.

“Your guy doesn’t win and you figure something is wrong, I’m not going to like the guy. I’m against him and everything but that’s all there is, sore loser. Sore loser,” he continued. “I was one.”

The grilling entrepreneur praised Trump for his business skills, noting POTUS pulled him out of bankruptcy by putting on the pay-per-view fight between him and Evander Holyfield in 1991.

“I was broke, too. Bankrupt. Put me back, he was part of writing those checks, so I could be on the wealthy side again. So I’ll always be grateful to the entrepreneur Donald Trump,” he said. “And now President Donald Trump.”

“He’s a good President. A lot of people don’t like him, but evidently more do, because he was elected President of the United States.”

Foreman also noted that he almost wasn’t able to win the fight that night because Trump gave him such great meals and accommodations ahead of the event.