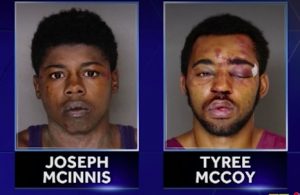 Two unlucky armed robbers were surprised on Tuesday when the bar they tried to hold up was full of off-duty police officers. Yes, you just can’t make this up!

Joseph McInnis III, 21, and Tyree McCoy, 22 {pictured above}, held up a clerk at the take-out portion of Monaghan’s Pub in Woodlawn, Md., WBAL-TV Baltimore reported. What they did not know was that the pub was hosting a police officer’s retirement party, and dozens of off-duty officers were present. 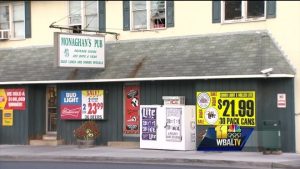 Immediately after McInnis and McCoy fled, the clerk notified the off-duty officers to the armed robbery. The robbers had not gone far, investigators said, when several officers ran out and took them into custody.

“I’m sure that they weren’t planning on there being a large room filled with police officers,” Baltimore County police Officer Jennifer Peach said.

A police incident report says an officer hit McCoy with a closed fist because police couldn’t control his arms after tackling him.

None of the employees, patrons, or officers were injured, police reported. The two men have been charged with armed robbery and possession of a handgun, and are currently being held without bail.