“Gendered” Happy Meals Are So Offensive Michigan Reps. Made a Law Saying So 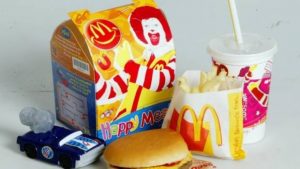 Don’t ever make the mistake of thinking political correctness has reached peak stupid.

It apparently never will.

Lawmakers in Michigan have taken some time away from not attending to Flint’s contaminated water and Detroit’s crumbling economy to whine about how offensive McDonald’s Happy Meals are, legally.

As Conservative Tribune reports, 15 state representatives have co-sponsored a bill that would like, I don’t know, officially recognize they’re triggered by pink and blue Happy Meal toys.

“Often, the designated ‘boy toys’ are action figures or building toys; typically in primary colors, whereas ‘girl toys’ are often stuffed animals and are usually in a pastel color scheme,’’ the resolution states.

“This is a significant issue as billions of these meals are sold every year and this practice can influence and limit children’s imaginations and interests by promoting some toys as only suitable for girls and others only for boys.”

“Customers should simply be offered the choice of toy. Example: Would you like a Transformer or a My Little Pony,” the resolution insists.

They are aware America’s children are facing real problems, right?

As CT’s Bryan Chai astutely points out, “if the availability of certain Happy Meal toys is influencing and limiting children’s imaginations and interests, parents have failed miserably at their jobs. And lawmakers have miserably failed their constituents by insisting this is something worthy of resolution.”

Seriously. It’s like Democrats are in a competition to see who can waste the most time and tax dollars, and boy are they giving it their all…