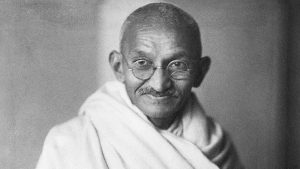 If you thought you’d seen cancel culture go off the deep end when they dug up the old tweets of a dude who donated his beer money to charity, you have apparently seen nothin’ yet.

Now, Mahatma Gandhi, yes, that Mahatma Gandhi, is being outed for the alleged racism of the historical equivalent of his old tweets as well as being accused of offensives of the #MeToo variety.

Remember when we thought peak political correctness was in 2016?

Last week, NPR dropped their highly woke musings that “While Gandhi is deeply revered as a spiritual and political leader, people are now scrutinizing his sexual practices and his early writings in South Africa, which many black Africans are calling racist.”

While Gandhi is deeply revered as a spiritual and political leader, people are now scrutinizing his sexual practices and his early writings in South Africa, which many black Africans are calling racist.https://t.co/jttj9NrfIp

“In 1903, when Gandhi was in South Africa, he wrote that white people there should be ‘the predominating race.’ He also said black people ‘are troublesome, very dirty and live like animals,'” reports NPR.

The article, however, even admits that Ghandi outgrew his racist views, but cancel culture doesn’t discriminate on old views, remember?

“Gandhi as a young man went with the ideas of his culture and his time. He thought in his 20s that Europeans are the most civilized. Indians were almost as civilized, and Africans were uncivilized,” biographer Ramachandra Guha told NPR.

“However, he outgrew his racism quite decisively, and for most of his life as a public figure, he was an anti-racist, talking for an end to discrimination of all kinds,” he said.

And yes, poor old Ghandi was slapped with a #MeToo charge as well.

Ghandi’s thoughtcrimes, NPR explains, “included gender discrimination. Gandhi championed women in politics. But he was also obsessed with his own celibacy.” Wait…what?

“In his late 70s, before he died at 78, he slept naked with his grandniece when she was in her late teens. He said he wanted to test his willpower to abstain from sex.”

Um…how is abstaining from sex gender discrimination? Yeah, this is really creepy and weird and demotes Ghandi in my own view, for sure, but is NPR suggesting Ghandi was sexist because he only tried to abstain from sex with women? Would it have been more woke of him to try to abstain from sex from men as well? Or something? I don’t get it. Sexual abstinence is now discrimination?

Now, now, thought police, let’s be real: Ghandi was from a decidedly different culture than our own and had some religious beliefs and practices that most of us would find odd or even outrageous.

I have, however, been reliably informed by these same people that all cultures are equal. Where’d the tolerance go? Who is to say that Ghandi’s decision to sleep with a considerably younger woman naked to test his own willpower isn’t a valid religious practice? What bigots!

As Ben Shapiro is fond of saying, two things can be true at once. Yes, Gandhi can be a great freedom fighter who can be revered for his legendary passive resistance and civil disobedience (something Antifa should take a lesson from, ahem) and who also had some less-than-stellar views about Africans at one time and some pretty inappropriate relationships with his younger female relatives for the sake of his own sexual abstinence.

We tend to idolize figures like Ghandi while forgetting that, in spite of all their admirable achievements, they were just humans. I don’t care much either way, the only person I idolize died on the cross for my sins. Everyone else pales considerably in comparison.

Those who don’t have a savior, however, are going to look for one in fallen humans. And if they continue to do that, they’ll always be disappointed.

This is the fatal flaw of cancel culture. If you dig long enough through Twitter, or old writing, or video archives, or selectively edit videos, or incessantly repeat certain narratives, you’ll find something pretty unflattering about everyone.

We need to stop expecting humans to have led impeccable past lives before we allow them to be respected for the good they’ve done or there will be no good to appreciate in the world left.

Is that really so hard?