Game Over for NFL: Will they be bankrupt by the end of the season? 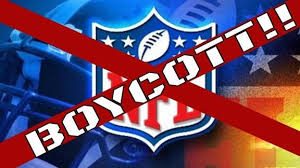 As the anti-American demonstrations and protests continue to grow in the NFL it looks like the American people are holding a protest of their own.  The message is clear: We will not spend our money to watch neanderthals carry a ball up and down a field after dishonoring our country’s flag and anthem  The NFL is starting to feel the sting!

NFL ticket sales are down 18% compared to last year at this time.

“We have seen a massive decrease in NFL ticket purchases this past week in comparison to years past. Week 3 seems to usually have less ticket orders than week 2, but this year ticket purchases are down more than 7 percent from this time last year,” said TickPick’s Jack Slingland.

Many football fans believe the players are wrong. They believe if the players want to protest social injustice that they should do it on their own time but not while they are on the job. Many people would be fired instantly if they did something so disrespectful while on the job.

One Indianapolis Colts “fan” went viral on Facebook as he burned $4000 worth of season tickets in his backyard. You can see the post here.

Another way to punish the NFL is to boycott the companies that have publicly sided with the protesting players, including Budweiser. There are many other brands of beer that aren’t supporting the NFL, so give them your business.

Allan Jones, CEO of Check into Cash and Hardwick Clothes advertises during NFL games and provides clothing for NBC’s on-air NFL sportscasters and commentators. Make that USED to advertise and provide clothing as he has announced that due to the protests, he is pulling all ads and will no longer provide the clothing to the NBC personnel.

DirecTV, one of the nation’s largest providers of satellite TV has announced that they will give full refunds to everyone who cancels their subscription for the NFL Sunday Ticket package. If just 10% of DirecTV’s customers cancel their NFL sports package, that will also have a significant impact on the NFL’s revenue.

A number of restaurant owners across the nation have declared that they will no longer have NFL games on the TVs in their restaurants. A local restaurant in my area, ‘Smokin’ This and That BBQ’ is one of those restaurants who will no longer show NFL games. As a result, they are getting increased business, including ours as we had their BBQ for dinner last night and I hope many others take their business there as well.

State politicians in states with NFL teams are also talking about taking actions that will financially hurt their NFL teams. Louisiana State Rep Kenny Havard says he is willing to pull state funding and tax breaks the state provides to the New Orleans Saints. Currently, the state of Louisiana provides $165 million to Saints in state funding and tax incentives. The valuation of the team is placed around $1.5 billion, so if Havard got his way, the team could lose just over 10% of their valuation. Havard told the media:

“Disrespecting our national anthem and flag in the name of social injustice is the highest form of hypocrisy.”
“I believe in the right to protest, but not at a taxpayer-subsidized sporting event. Do it on your own time. There are plenty of disabled children, elderly and veterans in this state that would appreciate the money.”

Louisiana State Rep. Valerie Hodges, sits on the House Appropriations Committee and says she wants the House and Senate to review the Saints’ benefits they get from the state.

A number of Wisconsin lawmakers are speaking out against the NFL players’ protests. State Rep. Rob Brooks posted on Facebook:

“Lack of respect for the NFL? What a joke! How about a total lack of respect for the country that gave them the opportunity to go to college and make a great living. I would love to hear your thoughts and see if you will utilize your rights to send a message to the NFL. I for one will be purchasing a lot more Badger attire.”
State Rep. Ron Tusler took to Twitter, posting:

“Pack do not seem to be able to play politics and football at the same time. Hope they play better in the second half.”
“NFL Kneeling drama is a convenient distraction from the NFL’s domestic violence and concussion problems.”

If more people, business owners and politicians Continue this sentiment, the NFL could be left financially bankrupt by the end of this season.

Last week I announced my own personal boycott of the NFL and had over 50,000 reactions on Facebook alone with many expressing the same sentiment. This was my statement:

I want to publicly thank JJ Watt for his character and contribution to the great state of Texas in the aftermath of Harvey. However from this point forward I will not watch or support the NFL. To the best of my ability I will avoid the products and services of its advertisers and I will not visit establishments that have it on television for public consumption. I can cook my own buffalo wings at home.

I support your right to free speech and value it as a highest virtue. However, I believe in the United States of America, its ideals, its excellence, and it’s symbols. I do not agree with the disrespect that is being demonstrated towards the national anthem, the American flag, the police, and by default, our military.

It is my sincere prayer that we can all use our right to free speech to soon engage in honest, peaceful dialogue to find solutions to the issues that divide us. In the meantime I will exercise my right by protesting those who continue to sow the seeds of division. Will my decision make a difference? It will to me.

Love to you all.
Chad
Political Cowboy

Time will tell if the decline will continue. It might not be long before we find out what marketable skills these protesters possess on the normal job market. I can guarantee they won’t bring the millions of dollars that playing with a ball does.