FUNNY/NOT FUNNY as Kaepernick is named Citizen of the Year 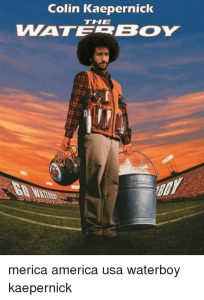 Well you’ve gotta hand it to GQ. They certainly know how to stir up controversy and get the average person talking about their fashion rag.

This week GQ named Colin Kaepernick their 2017 “Citizen of the Year,” receiving quite the backlash in return. The NFL quarterback turned activist has become one of the most polarizing figures in America and America refuses to be silent on GQ’s decision.  Some of it has been quite funny! 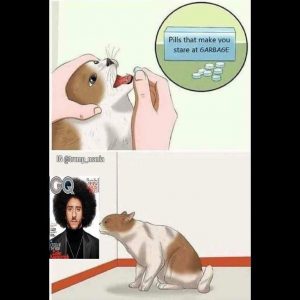 Former ESPN reporter Britt McHenry tweeted: “Wear socks depicting police officers as pigs; wear Fidel Castro as a fashion statement IN MIAMI; sue NFL for collusion when gf compares owners to slave owners… Win Citizen of the Year,” she wrote. “Serve in the US Military…nothing. What a joke, GQ. #Kaepernick.”

Many others were quick to point out that Houston Texan JJ Watt raised $37 million for Hurricane Harvey, Eagles Malcolm Jenkins met with lawmakers to help the community, and Dolphins Kenny Stills met with Miami police. Surely they could’ve been considered ahead of Kaepernick who not only disrespected the country with his protest but has only donated funds to organizations that further his extreme leftist ideologies.

Make sense to you? Me either. But remember this is the same magazine that has honored folks in the past like slimy Amy Schumer, public masturbator Louis CK, and Mr. “Open Secret” Kevin Spacey. So why not give the honor to a guy that’s been on his knees as much as Jenna Jameson?

As comedian Donnie Baker says, “OJ is good with knives.  Why don’t we make him Surgeon General?”

Kaepernick’s actions have made him virtually unhirable by NFL owners while others defend his actions as freedom of speech. They accuse owners of discrimination and call them “slave owners.” Even Kap himself has filed suit against the league.

Granted none of the team owner critics would hold themselves to the same standard if they were business owners that had an employee who consistently insulted customers and told them to GET OUT of their establishment. They’d  fire that person immediately no matter how much they defended their so-called freedom of speech!

I hope for Kap’s sake there is good money in being a GQ cover model because it doesn’t look too good for his future as a professional ball player. 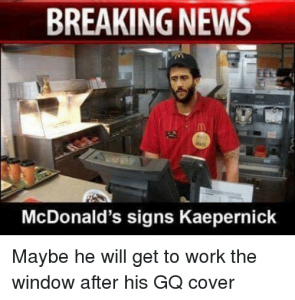