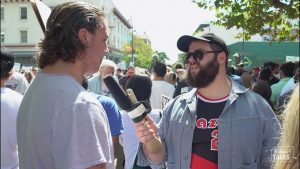 Ah yes! Further proof that there is an unhinged mental disorder running rampant in the streets in the name of tolerant liberalism. This video is hilarious!

Daily Wire points out that despite the cancellation of the “Free Speech Week,” which was allegedly going to star Milo Yiannopoulos, Ann Coulter, and Steve Bannon, a bunch of social justice activists converged on Berkeley to protest anyhow. So YouTube personality Fleccas, real name Austen Fletcher, arrived on the scene to learn firsthand what all those outraged activists were specifically protesting. By the end of the day, Fletcher came to the conclusion that a vast majority of them don’t really know and even fewer are able to defend their incoherent political positions.

The protesters who are very agitated obviously don’t have a firm grasp on why they are so upset. Most people have a line of argument that is like a swamp, a mile wide and an inch deep and full of crap.

Enjoy the video below.

Tucker Carlson recently interviewed Fletcher and asked him to estimate what percentage of the crowd can actually explain why they are protesting coherently and Fletcher estimates 5-10 percent.

You can see that interview below.