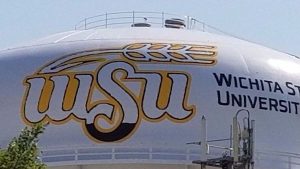 What are these American colleges and universities teaching our kids these days? Maybe if they could stop promoting safe spaces, protest environments, and worrying so much about who gets offended they could focus on little things like typos. Yeah that’s right! TYPOGRAPHICAL ERRORS!

Recently the water tower at Wichita State University was repainted and whoever did the painting obviously never learned how to proof read! Oh sure, we all make mistakes. I’m sure there are plenty of errors in this article, but at least I’m not painting it on an institution of higher learning’s water tower. Take a look at this!

I don’t know if this was really the school’s fault, but it’s their name on the water tower, so it’s not a good look regardless of how this happened! I doubt they’ll be adding this image to the school brochure.

I’m sure it wasn’t an English major painting the tower, but still, anyone over the age of 7 should be able to at least see they misspelled “state.”  Big enough to be seen a quarter mile away! But take a closer look and see for yourself.

One would think that at some point somebody on the painting crew would stop and say, “Um, something’s not right.” Now the “universite” will be buying a whole lot of White-Out!

And of course, with the internet being the brutal place that it is, the world isn’t about to let it slide.

Well, at least it wasn’t a tattoo! And while it isn’t a major mistake (it can be fixed) it sure is a public one!

Maybe if educators would once again focus on…oh you know…educating rather than spending all their time espousing their political opinions then maybe things like this wouldn’t happen.