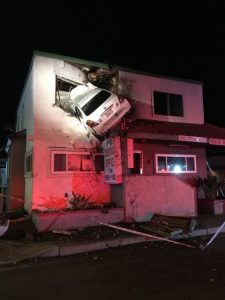 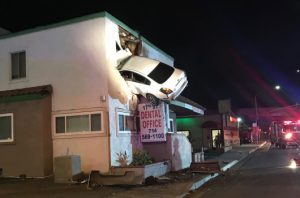 What do you mean you parked it upstairs?

A car wound up on the second floor of a dental office in Orange County after hitting a median on the street. The driver, who admitted to using drugs, was taken to a hospital, along with a passenger. Both sustained minor injuries, police said. There were no other reported injuries.

It would seem that the drug use got them very high. Literally! The dental office received quite a cavity.

Californians are already blaming Donald Trump for putting the building in the path of the car.

It’s quite possible that the vehicle operators were actually illegals who were practicing their wall jumping. They need more practice!

It’s still unclear as to when the Duke boys bought a white Nissan and moved to from Hazzard County to Orange.

When asked how fast they were going, one witness said, “They we’re flying!”

Authorities confiscated the pilot/driver’s iPhone and Siri said, “Second floor. You have reached your destination.” 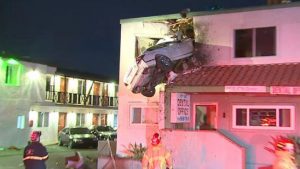 Where we are going…we don’t need roads.

I’m not sure if these guys deserve a ticket or a trophy! Obviously the request to fly by the tower was denied! 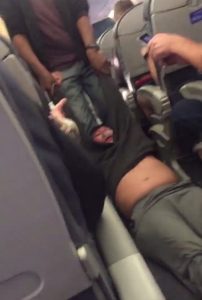 They found this guy in the backseat trying to get on another cheap flight.

This is Jake from State Farm, how can I help you?

Good luck with this one Jake.