From Tolerance to Totalitarianism 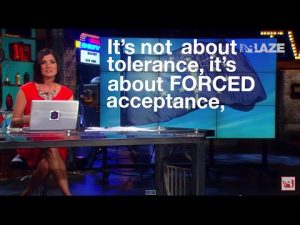 Today’s LGBT (initials that stands for Lesbian, Gay, Bisexual, Transgender) movement has no interest in a live-and-let-live philosophy of life.

Libertarian journalist John Stossel of the Fox Business Network said that the homosexual “movement has moved from tolerance to totalitarianism. It’s the totalitarianism of the Left.”

Tim Gill, a software programmer who made a fortune in the 1990s, is a 63-year-old homosexual from Colorado who in past three decades has poured $422 million of his fortune into the cause of equal rights for the LGBTQ community – more than any other person in America. Within the movement, he is praised as a visionary, a computer-nerd-turned-brilliant-strategist, the mega-donor who united a movement around the fight for marriage equality and then pushed onward to victory.

After taking two decades to achieve marriage equality, Tom Gill wants to win nondiscrimination laws nationwide in half the time.

Since one in three LGBTQ people in America today lives in the South, Gill says, “We need to bring the freedoms we now have to them.” He goes on to say, “We’re going into the hardest states in the country,” he says. “We’re going to punish the wicked (i.e. anyone who opposes the homosexual agenda in the South)”

Ben Shapiro observes: “The sex bullies have taken over the social sphere. Now you’re considered intolerant if you simply want to protect the innocence of a child in the classroom, or think that you ought to be able to teach your kids about the advantages of traditional marriage, or believe that men and women are different from each other. You must be cured of your thought crimes. And the sex bullies are there, bullhorns in hand, ready to apply that cure at a moment’s notice.”

In a 1987 speech to the National Press Club in Washington, homosexual spokesperson Jeff Levi proclaimed, “We are no longer seeking just a right to privacy and a protection from wrong. We also have a right — as heterosexual Americans already have — to see government and society affirm our lives.”

Dr. Michael Brown, in an article titled, Christians Must Unite Against Gay Bullies notes: “As I have warned for years, the activists who came out of the closet want to put you and me in the closet, and they will not rest until that door is safely shut. It is time for us to say: That will never happen, and we will go to jail rather than compromise our convictions. Your bullying will backfire in the end.”

Pastor and author, Wallace Henley asserts that Christians are on the verge of being treated as were the Christians in 1st century Rome. Henley sees this as yet another step in a process that began with “marginalization” and continued with “caricaturization” and “vilification.” American society is vilifying Christians and Christianity right now. The next steps are “criminalization,” and finally, “elimination.” A Supreme Court ruling adverse to natural marriage will bring America across the threshold of criminalizing the Faith that made America both strong and free. In other words, it will not be long before people and institutions with principled objections to same-sex marriage will clash head-on with the law. For example, churches that do not recognize the marital rights of same-sex couples should be prepared to lose their tax-exempt status.”

The charge of homophobia has also been increasingly evidenced as being part of a means of intimidation used in promoting the homosexual agenda. Due to what homophobia has been made to denote, that of being a repressed homosexual, or possessing an irrational fear of being approached by homosexuals, or of being a bigot persecuting victims, the widespread use of the term “homophobic” attaches a powerful stigma to anyone who may even conscientiously oppose the practice of homosexuality, thus silencing many who might otherwise object to it.

Noted homosexual activist and pornographer Clinton Fein, in his article, The Gay Agenda stated: “Homophobic inclinations alone, even without any actions, should be criminal and punishable to the full extent of the law.”

Throughout society, homosexual activists demand that homosexual behaviors not only be “tolerated,” but celebrated. (That’s what the euphemistic slogan “celebrate diversity” supposes). They have masked their true political agenda by hijacking the language of the genuine civil rights movement and through the crafty and disingenuous rhetoric of “tolerance” and “diversity.”

Anyone who believes the Biblical directive that human sexuality is a gift from God, to be shared between man and wife within the bonds of marriage, is branded “homophobic,” “hateful” or “discriminatory.” They are to be silenced by all means possible.

A new manifesto released last week by leading Evangelical Christians has drawn fire for its embrace of traditional sexual morality based on biblical norms.

The declaration, billed as the “Nashville Statement” and signed by more than 150 Evangelical leaders, reaffirms Christian teaching on God’s creation of human beings as male and female, an assertion that flies in the face of recent attempts to proclaim a nearly infinite “gender fluidity” based on “autonomous preferences.”

The Chicago Tribune similarly labeled the text as “Anti-LGBT” while offering “a more loving” statement of its own that basically says that any sex is good sex.

Salon magazine predictably blasted the statement as “bigotry-filled,” alleging that the manifesto contains “many discriminatory positions” and has rightly been denounced as “un-American toilet paper” written by hypocrites.

In spite of the pervasive and powerful attacks on our religious liberties in America, despair is not in order. The good news of the gospel is that there’s hope for people who are trapped in the homosexual lifestyle or who suffer from unwanted same-sex attraction. Part of our fallen condition as humans is that we are all subject to sin. Those who know the Savior of the world, Jesus Christ, are no better or worse than those who engage in homosexual sin.

But through the loving and redemptive power of Jesus Christ, we can all find salvation from sin. So can homosexuals. “Gayness” is not an “immutable” or unchangeable condition as homosexual apologists would have you believe. People can find freedom from homosexual behaviors and even from same-sex attractions. It’s not easy, but untold thousands of former homosexuals have done it.

As Christians, it is our duty, not to be hateful and demeaning of persons made in the image of God, but never to be tolerant of evil and wickedness that is bent upon destroying all that is good and godly. The God of The Bible is completely intolerant of sin. He recognizes only one way to cleanse ourselves of sin – that is to come to repentance (turning away from sin) and acceptance of the gift of salvation by grace through the shed blood of Jesus Christ on the cross. Christianity is the foundation of our Western culture.