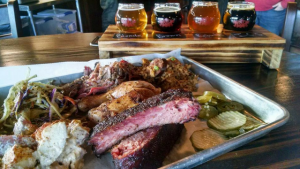 So if you think veganism is ridiculous, you should see what they think about the concept of avoiding eating animal byproducts.

To us, it’s silly hippie nonsense. To them, it’s cultural blasphemy.

Also, a lot of vegans happen to be jerks, who vandalize butcher shops and yell at people in the street.

So when a group of vegans tried to hold a festival in the city of Calais, local butchers, hunters, and meat-lovers weren’t going to sit idly by and watch their way of life bashed.

Fearing a beef with butchers, the French city of Calais has canceled a vegan festival that was scheduled for September 8.

The office the Calais mayor said the festival had to be banned to “guarantee public safety” and protect organizers and visitors from the “risk of an outbreak of public disorder,” The Telegraph reported.

Officials learned of what the announcement termed an unspecified “series of operations aimed at stirring up trouble.”

Farplace, the association that was planning the festival, said city officials told it that “hunters and farmers had come together to make very clear threats about what might happen if the event was held.”

Laurent Rigaud, who leads the butchers’ federation in the region, said plans were in the works to make an anti-vegan statement that day.

“We were ready to organize a big barbecue (in Calais), along with hunters, farmers, and restaurateurs,” Yahoo News reported.

He said about 400 people would have attend the barbecue, but insisted the event would have been peaceful.

“We wanted to… show that we are not the violent ones, but that there are extremists among the vegans,” he said.

I only have one question:

Is the barbecue still on even if the vegan festival is canceled?