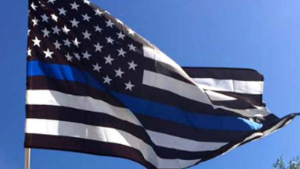 Colin Kaepernick has once again managed to stir up divide and debate, long after leaving the NFL. This time, he’s being facilitated by Nike, who decided to use him as a part of the 30th anniversary of their “Just Do It” campaign.

Yes, the boycotts and public burning of Nike gear has begun, but the Fraternal Order of Police, in a statement, said that rather than a boycott, we should put things into perspective.

Nike’s Kaepernick campaign features the slogan “Believe in something. Even if it means sacrificing something” (it was a good call not to use the phrase “stand for something”), so Chuck Canterbury, National President of the Fraternal Order of Police, rather than bashing Kaepernick or Nike, chose to simply highlight what sacrifice looks like.

Hundreds of thousands of men and women who put their lives on the line every day to defend the rights that assure Americans can be so blatantly insulting to the police.

Colin Kaepernick and all Americans have the constitutional right to freely express their views, even if they are uninformed and inflammatory. Indeed, law enforcement officers have an obligation to defend these rights and we do so every day, even in those cases when the views expressed are hostile, hateful or offensive to the men and women of law enforcement.

The Fraternal Order of Police has been called upon to boycott Nike for capitalizing on this former professional football player because he attracts controversy. In our experience, boycotts and similar exercises do not succeed and often serve only to enrich the company—which is not what we want to do. Our members and, for that matter, any American citizen, understands when the law enforcement profession is being insulted— we have no doubt they will make their purchases with that insult in mind.

He was quite clear that the FOP does not look kindly on Nike’s choice of a spokesman:

“f Nike chooses to create an ad campaign featuring a former quarterback who describes cops as ‘pigs’ and makes large donations to the family of a convicted cop killer and wanted fugitive, Joanne Chesimard, who murdered New Jersey State Trooper Werner Foerster in cold blood in 1973, they are free to do so.

But that they know what sacrifice really looks like:

Since 2016, 381 officers have been killed in the line of duty. They believed in something and sacrificed everything, as did the families they left behind. All of the men and women in law enforcement believe in something and are prepared to sacrifice everything.

Ultimately, this ad campaign will end and our nation will no longer associate “sacrifice” and “sneakers.” Instead, we will once again associate “sacrifice” with our fellow Americans in our military and police departments who stand in harm’s way to protect the rest of us and our right to express ourselves.

Back the blue, folks. Our support is much more valuable than some charred Nikes in our backyard.