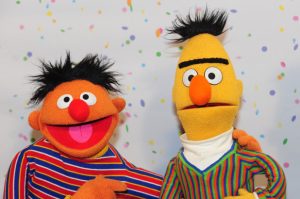 Oh my gosh this decade, you guys.

So, despite the fact that we’ve all light-heartedly joked about Bert and Ernie being gay for years and no one really caring much beyond that, it’s 2018 so now we have to seriously discuss whether puppets on a kids show are gay or not.

To be fair, there is a lot of crazy stuff coming out of kids’ shows lately that would cause one to wonder, but from a show that’s featured a green dude living in a garbage can, a giant yellow bird, and a counting vampire since long before the internet was even a thing, I always assumed Sesame Street was really perfectly innocent in depicting the beloved characters as living together and sharing a bed.

Besides, Ernie seemed pretty enamored with his rubber ducky, too.

A writer for Sesame Street who clearly wants to ruin the childhood of millions of 80s children recently told the magazine Queerly that he always imagined the Bert and Ernie as gay when he wrote them.

Can they not just be puppets?

“I always felt that without a huge agenda, when I was writing Bert and Ernie, they were,” he explained. “I didn’t have any other way to contextualize them.”

I’m not really sure why it took such an in-depth psychological profile of an orange and yellow puppet who argue about the appropriate time to play a game or what to name their puppy, but every writer has their own creative process, I guess.

Well, Frank Oz, who created Bert, voiced on Twitter that Bert definitely was not gay (again, we’re still talking about a puppet) and wondered why Bert and Ernie even needed to be gay (….exactly.)

It seems Mr. Mark Saltzman was asked if Bert & Ernie are gay. It's fine that he feels they are. They're not, of course. But why that question? Does it really matter? Why the need to define people as only gay? There's much more to a human being than just straightness or gayness.

I created Bert. I know what and who he is.

Despite making a pretty bigotry-free statement on the matter that I still can’t even believe is being discussed, Twitter users who clearly take everything entirely too seriously shot back…again…about whether or not puppets are gay.

“Why the need to define people as gay? Uh, because we exist. I’m gay. 100% gay,” wrote one user, according to The Daily Wire. “Always have been, always will be. I’ve known since I was 7, and was told what the word meant. Yes, there are a lot of bi and pan people out there, but there are also A LOT of gay people.”

I’m not sure if the user was a puppet or not.

Finally, I thought some common sense had been restored since Seasme Street tweeted out a statement saying that “Bert and Ernie are best friends” who were created for preschoolers to learn how to be friends with people who are different than them (see leftists?! Wrong intersectional talking point!), adding that while the characters “identify as male and posess many human traits and characteristics” that they “remain puppets, and do not have a sexual orientation.”

Sadly, the Tweet was taken down, because it’s 2019 and everything is absolutely bat-crap crazy now.