Fox Sports Host Shannon Sharpe: “The symbol of your country is racist!” (WATCH) 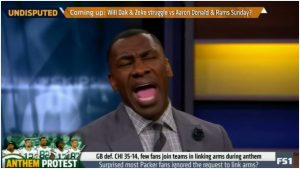 I’m thoroughly baffled at this point! Shannon Sharpe of Fox Sports just demonstrated that he is mentally impaired and a total tool bag who hates America. The loud mouth Fox Sports host went all ESPN on us when he ranted about the American flag and racism further proving that the NFL protests have really just been about being anti-America.

“The flag, you see, to a lot of people, symbols, patriotism but what does that symbol actually mean?” Sharpe asked stunned co-host Skip Bayless. “What does — what does – okay — you keep telling me that the flag means so much and it’s opportunity and freedom and liberty. Okay. Can you honestly say that everybody in America has freedom and liberties and opportunity?”

He goes on to say:

“Nobody fights for a piece of cloth…the symbol of yo’ country is racist.”

Bayless had nothing more than a timid, mealy-mouthed response.

The sports media establishment is pushing to make Sharpe’s mentality mainstream. That may be why we now have blacks showing up at the Tomb of the Unknown soldier to theatrically take a knee during taps.

How is it possible that patriotic Americans sit there and watch everything they revere publicly desecrated by the likes of Colin Kaepernick and Shannon Sharpe? Maybe we are just so used to it by now, we have come to accept it as normal. Let’s hope there are some left who will defend our flag and anthem.

As if their ratings weren’t low enough.  Go ahead…offend the nation that affords you your celebrity lifestyle Shannon.

And hey Shannon…to answer your question as to whether or not someone would fight over a piece of cloth. How about I meet you walking down the street and toss a bottle of ink on your $4000 suit.  I bet you’d wanna fight.

See the video below.