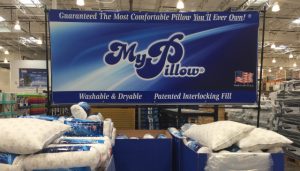 Mike Lindell, the CEO and founder of the hugely successful MyPillow company, is so angry at Fox News for refusing to share a paid television ad that promotes his upcoming symposium on election fraud that he has decided to pull all of MyPillow’s ads from the network.

Lindell has been a very passionate, outspoken critic of the results of the 2020 election results, claiming to have evidence of fraud and irregularities on numerous occasions.

The CEO and founder of the company has also made the claim that the election was stolen, despite the certification of the results by all 50 states.

Fox News, in a statement to The Hill, acknowledged that it declined to air Lindell’s TV ad, and that Lindell has “paused” his MyPillow ads.

Last year MyPillow paid close to $50 million for Fox News ads, and reportedly spent another $19 million this year, according to a report in The Wall Street Journal.

Lindell is said to be outraged that the network refused to air his ad, which makes no specific allegation of vote fraud and significantly promotes FrankSpeech, the businessman’s new social media platform.

Newsmax is planning to the air the Lindell ad on its network.

Newsmax did come out and clarify that “We do not endorse any political or issue ad that appears on our network. We do believe, however, that all Americans have a First Amendment right to free speech.”