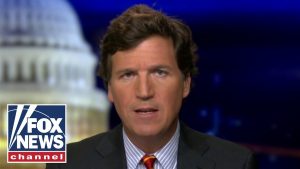 Fox News host Tucker Carlson has announced that he has a new show that is set to air starting next week that will be in addition to his already extremely popular program “Tucker Carlson Tonight,” which has pretty impressive numbers when it comes to viewership.

“Freedom of speech is under assault, and while the other media outlets are obsessed with censoring original thought and getting smaller, we are expanding, taking on all topics,” Carlson stated on Wednesday.

“We will not be silenced or canceled,” he added.

“Tucker Carlson Today” will be “the in-depth, unfiltered conversations that America needs, making sense of the day’s events and taking a deeper dive into the issues we care about, with the clarity you deserve,” Carlson promised.

The new show comes after Fox News announced earlier in the month the addition of former White House Press Secretary Kayleigh McEnany as a network contributor.

Congratulations to Tucker Carlson! He’s been a great voice of reason in the mainstream media that has helped to open many eyes that have been blinded by liberal networks like CNN.

Here’s to hoping for continued faithfulness to conservative principles and reaching more and more viewers with the truth.