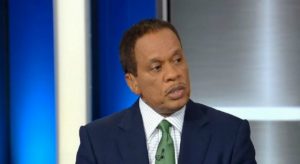 Juan Williams, a Fox News analyst and raging liberal, has been very busy lately speculating about all sorts of crazy conspiracy theories, making him the newest member of the tinfoil hat club.

Williams recently penned a piece for The Hill where he spouted on and on about how how President Trump might cancel the November election due to the coronavirus outbreak, thus extending his time in office. As we all know, that’s the Democratic Party’s worst nightmare, and given the fact that liberals are prone to emotionalism, it makes total sense for someone like Williams’ mind to immediately go there.

Williams, a registered Democrat, said in a Monday op-ed for the Hill that the administration has been “incompetent” in its response to the virus and that the president’s Oval Office address to the nation last week was “full of factual errors” and failed to reassure people or the financial market.

“What’s next? Cancel the November election? It could come to that — because despite the power of incumbency and a passionate political base, President Trump’s political prospects are looking shaky,” Williams said in the opening of his op-ed.

The Fox News pundit said that “Trump regularly fires up his base by telling them he is looking out for them” and listed examples, such as building a border wall and bringing jobs back to the coal industry.

“Well, four years later there is no wall. Coal mines and manufacturing remain in decline. Household debt and the national deficit continue to balloon,” he wrote.

Williams went on to say that Trump is reliant on using the failings of Democrats to help “spin” things in his own favor and to keep his approval up with voters.

Because the left would never, ever do any sort of political spin to make Trump look like the Big, Bad Wolf, right?

Williams is just fear mongering to help his career and to make it appear he has some valuable contribution to make to the coronavirus scenario unfolding in our country.

Trump isn’t likely to cancel the election. Democrats need to take a deep breath and get over themselves.