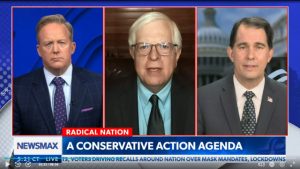 Former Wisconsin Gov. Scott Walker and founder of PragerU, Dennis Prager both recently sat down with Newsmax host Sean Spicer to discuss the importance of their work and the work of other Americans to fight back against the progressive policies that are eroding our liberties.

Walker, who serves as the president of the Young Americas Foundation, told Spicer during an interview on his “Spicer & Co.” program that his organization trains “the next generation of freedom fighters,” which also includes inviting conservative speakers like former President Donald Trump, Sean Spicer himself, Prager and many others.

“We’re cutting through the cancel culture,” Walker went on to say. “We’re pushing back on the impediments to free speech, and we know when our voices are heard on campus and in the larger digital world. Our messages resonate whether it’s through speakers, conferences, events, even if it’s out to the Reagan ranch. Those are all things that helped get around the left-wing indoctrination.”

Spicer told Prager that after he left the White House, he has spoken at 10 different colleges and universities through Young America’s Foundation funding, and often learns that few universities invite conservative speakers like himself.

Prager said PragerU uses the internet rather than a brick-and-mortar presence. The site is not an accredited academic university, its website says, but offers videos that are focused on changing minds.

“I’m not here to just extol the virtues of PragerU, which I think are known to too many of you, and I know you kindly mentioned us in your wonderful book,” he went on to tell show host Sean Spicer. “It is important for people to understand how important it is to the left to shut us up. This needs to be emphasized.”

Prager added that he “studied the left all of my life,” including having communism as his field of study while attending the School of International Affairs at Columbia.

“I learned Russian in order to read the Soviet newspapers,” he went on to recall. “So please, everyone watching this needs to understand the following: Everywhere the left takes control, whether it is the university, a high school, or a country, it suppresses free speech.”

Spicer then went on to reveal that there’s not been a single instance where he has been invited to speak where there haven’t been protests, however, when he leaves from such an engagement, students who have not been exposed to conservatism before often tell him they didn’t expect to hear the message that he shared.

“We hear it all the time,” Walker stated. “In fact, when we have our college conferences, for example, we just had one in Houston for a week, those students probably heard more conservative voices in that one week than they heard in all the years from junior kindergarten all the way through college. …”

”We know there’s a pushback, and they need to wake up. Dennis is exactly right. They know they can’t win with a level playing field, because our ideas work,” the former governor added.