Former Virginia Tech Soccer Player Files Suit Against Coach, Alleging She Was Forced From Team For Not Kneeling Before Game 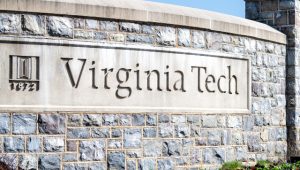 A former player for the Virginia Tech women’s soccer team has filed a lawsuit against the team’s coach, stating that he started a campaign of abuse against her and eventually forced her off the team after she refused to kneel before games.

Folks, this is how we have to fight back against the ridiculous Marxism that is being forced down our throats by social justice warriors who will simply not accept that you have a worldview that is different from their own.

To not go along with their program makes you a “white supremacist” and a “racist,” despite the fact that’s not true at all.

“Hening’s stance was costly — too costly,” reads the lawsuit, filed on March 3. “Her coach dislikes Hening’s political views. Because she refused to kneel, he benched her, subjected her to repeated verbal abuse, and forced her off the team.”

Hening’s suit says she “supports social justice and believes black lives matter,” but “does not support the BLM organization.” It alleges that Adair singled Hening out during the halftime of a September game after she did not kneel and that he continued to criticize her performance and did not let her start subsequent games, even though she had done so previously.

The lawsuit seeks a ruling that mandates “First Amendment training” for Adair and to have Hening reinstated on the team, as well as provide a monetary award.

“Coach Adair’s campaign of abuse and retaliation made conditions for Hening so intolerable that she felt compelled to resign. Hening did not want to leave,” the lawsuit says.

Here’s to hoping Hening is successful in her battle against the social justice warriors who are quickly destroying this country and keeping it divided along racial lines, erasing all of the hard work by Civil Rights activists to unite the nation together.