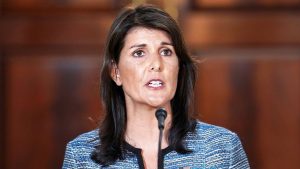 Former United Nations ambassador Nikki Haley called on President Joe Biden over the weekend to extend the troop withdrawal deadline of Aug. 31, calling the pullout a “total surrender” and an “embarrassing failure.”

Haley sat down with the folks on CBS News’ “Face The Nation,” where she stated that the Biden administration needs to “go back and extend that August 31st deadline and make sure that the Taliban knows they’ve got to let people into the airport.”

“We’ve got to get our Americans out” of Afghanistan, Haley insisted, saying,  “We’ve got to stay true to those Afghan allies that we made promises to. And we’ve got to make sure we do this in a very strong way going forward.”

She then went on to say that Americans don’t realize that the U.S. citizens located in Afghanistan “are not near Kabul.”

“They’re actually on the outskirts out of there. …So this is a time where we need to have a list of our Americans,” she stated. “We need to make contact with where they are and we’ve got to go get them if they can’t get to the airport.”

“I can’t believe that Biden got it so wrong that he said that no Americans were having a hard time coming to the airport,” Haley went on to explain. “He said al Qaeda was no longer in Afghanistan. He said our allies were fine with what he did. Either the people around Biden aren’t telling him the truth or he is not thinking in a normal way. I mean, something is very wrong here. “

Haley then went on to rail against the way the withdrawal has been done thus far.

“They’re not negotiating with the Taliban, they’ve completely surrendered to the Taliban,” she proclaimed, adding, “This was a complete and total surrender and an embarrassing failure.”

“Our American people there are our number one priority,” she stated. “They have to do whatever it takes to get our Americans out.”

“This is an unbelievable scenario where literally the Taliban has our Americans held hostage,” Haley continued.

“It’s a scary time. And we have to make sure that we are working with our allies who literally won’t trust us at this point and think we’ve lost our minds. We have to figure out a way to get our Americans out and to get our allies out,” the former ambassador concluded.