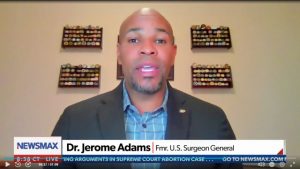 Former Surgeon General Jerome Adams had some harsh words for President Joe Biden and his travel ban on eight southern Africa countries after the omicron variant of the coronavirus was discovered, calling it “xenophobic” and slamming it for not taking into account the fact that the mutation is also showing up in countries that have a predominately white population.

“It’s really frustrating to me that we have a xenophobic travel ban against only south African countries when we know that over a dozen mostly European countries, mostly white countries, have shown the virus,” Adams, who served in former President Donald Trump’s administration stated during a conversation on Newsmax’s “National Report.”

Last Friday, Biden issued a travel ban from eight southern Africa countries: South Africa, Botswana, Zimbabwe, Namibia, Lesotho, Eswatini (formerly known as Swaziland), Mozambique, and Malawi due to concerns about the ”heavily mutated” omicron variant. The ban became effective on Monday, but by Tuesday, he said the block would be evaluated week-by-week.

The president’s decision is under fire because, during the 2020 election campaign, Biden slammed Trump’s travel ban from China in the early days of the pandemic as being xenophobic.

“I’m calling on the Biden administration to fix this right away,” Adams stated during the interview on Wednesday.

He then stated that the president can “either increase the ban on all countries or roll it back and actually put in place smart testing that allows us to test people when they leave and when they enter the country so that we can more appropriately figure out who’s coming in and stop them before the virus spreads even more.”

The former surgeon general then added that it’s likely the omicron variant is “probably already here.”

“One of the unfortunate things that I’ve been pointing out is that the John Hopkins website tells us the United States is in the bottom half of the world in terms of sequencing that variance,” Adams went on to say. “The fact is that South Africa did the world a favor by telling us that this existed, but we’re finding out now if we backtrack, that it was already in Europe and in Canada.”

Adams then stated that this means Americans need to “prepare, not panic.”

“We are in the midst of a delta surge and that is still the bigger threat to us,” he continued. “The way you protect yourself is by getting vaccinated, getting boosted, and by our government increasing testing so that we can detect the disease.”

Adams then stated that the state and federal government should provide every citizen with a free home test for the virus.

“Everyone in the United States should have had a free home test delivered to them by the federal government,” he remarked. “That’s a missed opportunity. These pills mean nothing if we can’t identify that you have the virus within the five-day window of the infection starting.”