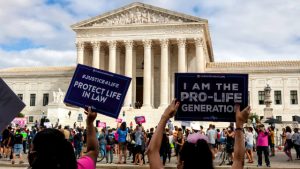 Jenna Ellis, who formerly worked as a legal counsel for former President Donald Trump, stated on Thursday that while she’s “grateful” that the nominees the former president helped put on the bench ruled that the abortion law in Texas can stand, she also said during a panel discussion for “National Report” that she believes the decision should have been 9-0 instead of split by liberals and conservatives.

“This was an emergency injunction,” Ellis went on to say during the panel. “It was the left asking for a knee-jerk reaction to say, ‘Oh, of course, we’re going to stop a legitimate law that Texas clearly has the constitutional authority to implement.'”

Ellis also said that there shouldn’t be any kind of political bias that would stand in the way of a ruling.

“I am hopeful that as cases continue to progress to the Supreme Court that we will have these types of holdings and the protections of life,” said the former Trump counsel. “The reality is that there is no constitutionally protected right for an abortion. The Supreme Court has never stood for that proposition. Even in Roe versus Wade, Planned Parenthood versus Casey. It’s the undue burden test.”

She also noted that the Supreme Court “has found that the government does have a compelling interest to protect life and as we continue to make medical advances, we see that there is a fetal heartbeat as early as five or six weeks. We know that human life begins at conception and must be protected from conception all the way to natural death.”

Radio host Jennifer Kerns, also a Newsmax contributor, said she thinks the case is showing a turn of public opinion on abortion toward a more pro-life stance.

“This is why Planned Parenthood is starting to hit the panic button,” Kerns went on to say . “This is why you’ll start to see them really talk about this issue ahead of the 2022 midterms.”

She noted that a recent Marist Poll showed that pro-life support has risen by about 17% among Americans in the last two years, and “we now know that about two-thirds of millennials and Gen Z actually are anti-abortion. They are very pro-life, much more so than my generation was.”

Kerns added that perhaps the most shocking number for Democrats is that now, over 34% of the people in their party consider themselves to be pro-life.

“What you’ll see the Democrats trying to push in the 2022 midterms is this is some war on women, but what we really know is the real war on women happened over the last 18 months with the COVID-19 pandemic with the lockout of jobs and small businesses and restaurant owners,” Kerns added.

It’s amazing how badly the left wants to fight for the right to murder unborn children, isn’t it? It’s also extremely gross and disgusting. This law is a miracle. it really is. Let’s hope it’s the first step down the long road to complete abolition of abortion in this country.