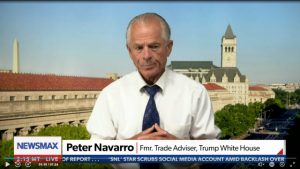 Former trade advisor to President Trump, Peter Navarro, sat down for a chat with Newsmax on Wednesday where he stated that President Joe Biden’s undoing of Trump-era policies is setting up the American people to have a “very expensive” Christmas holiday.

“That’s criminal that (administration officials) would say that this inflation is transitory,” Navarro went on to say during a conversation he had on “The Chris Salcedo Show” Wednesday. “At the beginning, when you’re growing crops, or you’re doing fertilizer for your Turkeys, or your pork, or beef, that’s all energy. It’s natural gas, and when energy prices go up, that creates a food price shock as well. So, those two forces are bearing down on what’s going to be a very expensive Christmas for the American people.”

When Biden took office in January, he reversed most of the policies Trump put in place, Navarro said, “crashing” a robust pre-COVID-19 pandemic economy.

“Joe Biden has undone everything on the economy President Trump did to take us to the strongest and most resilient economy we’ve ever had, (now it has) crashed, Navarro continued. “(There are) serious, serious, issues going into the holidays. I take no pleasure in the fact that Joe Biden is undoing Trump’s policies and creating all of this misery.”

As the nation prepares to enter the holiday season with Thanksgiving just around the corner next month, Americans are likely to prepare the most expensive holiday dinner in history, according to several reports.

CBS News reported Tuesday that sharply rising inflation is going to mean around a 4 percent increase in the price for a family of 10 to make Thanksgiving dinner this year, compared to the lowest cost in a decade for that holiday meal recorded just last year, in 2020.

“When you go to the grocery store and it feels more expensive, that’s because it is,” Veronica Nigh, who works as a senior economist at the American Farm Bureau Federation stated during a conversation with CBS, going to say that food prices have gone up 3.7 percent so far this year, versus a 20-year average of 2.4 percent.

According to the report, Nigh went on to explain that 10 percent of the prices are related to farming food products, while the other 90 percent are because of wages, distributions, and other associated costs, which the supply-chain mess continues to hamper.

“The best example is the price for a turkey, the main entrée of most Thanksgiving dinners, which will likely cost more than $1.36 per pound, above the benchmark price set in 2015, the New York Times reported Tuesday,” the Daily Wire said.

Supermarket News stated in a recent report that last year the price for a turkey was $1.21 per pound, which was the lowest since 2010.