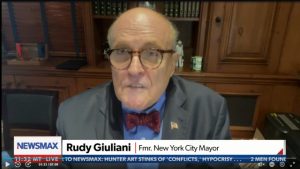 Former New York City Mayor and former personal attorney to former President Donald Trump, stated he still has not received a reason for being banned from making appearances on Fox News, but did go on to note that the decision came right after the network provided extensive coverage of information that confirmed “what I gave the New York Post” about Hunter Biden and his laptop was true.

“They just said I’m banned,” Giuliani went on to tell Newsmax’s Greg Kelly Friday night. “The last two weeks, they basically every night have had a report corroborating what I gave to The New York Post. Every time they tell you, The New York Post was accurate, I was accurate because I gave the New York post all their information.”

The mainstream media has started to acknowledge the contents of Hunter Biden’s laptop are legitimate, after months of denying The Post’s reporting on the issue. Giuliani said he “would think” that validation, including an article in Politico, would help to elevate his claims.

The Politico Playbook article includes information from a new book by Ben Schreckinger, “The Bidens: Inside the First Family’s Fifty-Year Rise to Power,” that reportedly shows evidence that some material published by the Post on Hunter Biden is genuine, including two controversial emails published last October.

“I mean, I was accused by [Joe] Biden during his first debate with President Trump of being a Russian agent with regard to that hard drive,” said Trump’s former personal attorney.

“There’s nothing Russian about it. It comes from Delaware. It’s his hard drive…the FBI actually confirmed that four months ago. So Politico’s story is really just news to the people who refuse to accept it. But I mean, also, they never denied it his computer ever. All you have to do is take a look at the pictures and you can tell it’s his computer,” he said.

Meanwhile, Giuliani claimed that he could “put Joe [Biden] put in jail” with some of the text messages and emails in his son’s computer that describe different financial transactions, and as a prosecutor, he could have gotten the records.

“The FBI never went for them, but there’s actually so many other instances like this,” said the former mayor. “There were about eight incidents like this. That there’s enough evidence to prosecute even without the records.”