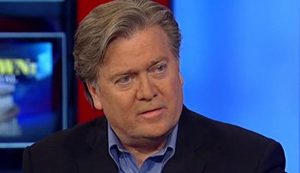 Steve Bannon, former advisor to President Trump, has been officially charged for playing a role in a scam that has allegedly defrauded folks out of hundreds of thousands of dollars, all which were donated to help build a wall along the southern border.

Audrey Strauss, the acting U.S. attorney for the Southern District of New York, and Philip R. Bartlett, inspector-in-charge of the New York Field Office, unsealed indictments on Thursday morning for Bannon, Brian Kolfage, Andrew Badolato, and Timothy Shea. The four men led the “We Build the Wall” fundraiser that sought donations to build a wall along the U.S.-Mexico border, which was a 2016 campaign promise from Trump. The group raised more than $25 million. All four men were arrested Thursday morning, and each was charged with one count of conspiracy to commit wire fraud and one count of conspiracy to commit money laundering, each of which could result in up to 20 years in prison.

“As alleged, the defendants defrauded hundreds of thousands of donors, capitalizing on their interest in funding a border wall to raise millions of dollars, under the false pretense that all of that money would be spent on construction,” Strauss said in a statement.

“While repeatedly assuring donors that Brian Kolfage, the founder and public face of We Build the Wall, would not be paid a cent, the defendants secretly schemed to pass hundreds of thousands of dollars to Kolfage, which he used to fund his lavish lifestyle,” she continued. “We thank the USPIS for their partnership in investigating this case, and we remain dedicated to rooting out and prosecuting fraud wherever we find it.”

The whole 24-page complaint against the four men gives details about the fundraising scheme, saying “the public narrative deliberately crafted” by Bannon, Kolfage, and Badolato “was false” because “in fact, although We Build the Wall spent money on the construction of a border wall, hundreds of thousands of dollars were siphoned out of We Build The Wall for the personal use and benefit” of Kolfage, Bannon, Badolato, and Shea.

People who do this sort of thing should be ashamed of themselves. They are fake patriots who took advantage of a serious problem that negatively impacts the lives of American citizens living along the southern border.

What kind of message does this send to folks who are open-minded and undecided in the upcoming election? It certainly isn’t going to help the conservative cause at all. Sad to see this happen, especially since Bannon had worked so closely with President Trump during the beginning of his campaign and administration.