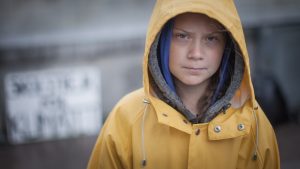 As you’ve witnessed stir-crazy progressive “activists” channel their rage at being locked down in their parents’ basement for the better part of 2020 into toppling statues of anyone who looks old and slave-owner-ey, you might wonder what, exactly, might these statues be replaced with.

This is a fair question, and it’s one that a former Swedish mayor has answered for his own nation.

Disrn reports (while making sure to clarify that this is not a story from the Christian satire site, The Babylon Bee), that Jan Björinge is proposing the Scandanavian nation tear down a statue of King Charles XII and replace it with a likeness of 17-year-old climate activist Greta Thunberg.

You heard that right, folks. I can picture the scowling “how dare you” immortalized in bronze now. Or, you know, whatever material would be eco-friendly enough for everyone’s favorite pint-sized climate alarmist.

“Remove the autocrat Karl XII and replace him with the climate activist Greta Thunberg,” declared Björinge, the former mayor of Umea municipality in an opinion piece published by Swedish newspaper Aftonbladet (don’t worry, I can’t pronounce that or “Björinge” either).

He went on to claim that the statue represents “evil deeds and outdated values” and that immortalizing Thunberg would be more consistent with modern Swedish ideals.

According to one of the critics of Björinge’s piece, this “evil” King Charles XII “devoted his life to defending Sweden” and led the Swedish Empire (they had an empire?!) to several victories during the Great Northern War in the 1700s (which was apparently a thing).

This is not dissimilar from what’s going on here at home, as “protesters” (doublespeak for “violent rioters”) have been targeting statues of both slave owners and abolitionists alike for vandalism or removal.

Their latest victim? George Washington, the first president of the United States.

One can’t help but wonder who George might be replaced with? Colin Kaepernick?