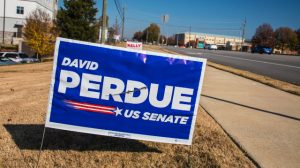 Former Sen. David Perdue has come out and acknowledged his loss Friday in the Georgia run off race against Democratic candidate Jon Ossoff, who is the projected winner of the election.

Perdue released a statement on Friday saying that his time serving as a senator for Georgia since 2015 was the “honor of a lifetime” and stated that he was grateful for having the support that residents of the state have shown him over the years.

“I am very proud of how our team in Georgia and Washington, D.C. fought everyday to deliver real results for all eleven million Georgians,” he said.

“Although we won the general election, we came up short of Georgia’s 50% rule, and now I want to congratulate the Democratic Party and my opponent for this runoff win,” added Perdue. “Bonnie and I will continue to pray for our wonderful state and our great country. May God continue to bless Georgia and the United States of America.”

Loeffler said Thursday that she had called Warnock and wished him “well in serving this great state.”

“While my heart breaks at not being able to continue to serve Georgia and America, I’m tremendously proud of all we’ve achieved together, and I owe so much to my incredible team that became like family to me, both in my campaign, and in my official office. It’s been an honor to serve together,” Loeffler said.

Serving our great state has been the honor of my lifetime.

The sad part of all this is that Republicans have lost control of the Senate. Now Democrats will have both houses of Congress and the White House when Joe Biden takes office.

Folks, the liberal agenda is about to be shoved down our throats. Keep praying, y’all.