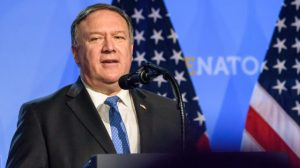 According to former Secretary of State Mike Pompeo wrote in a tweet, “Every piece of evidence suggests the Wuhan virus leaked from the Wuhan Institute of Virology. Communist China owes the world answers.”

The theory of the pandemic being caused by the coronavirus being created and leaked from a lab in China is one that the mainstream media and members of the scientific community have been trying to discourage and discredit ever since the beginning.

However, it seems the tide is changing among both liberals and conservatives on this issue.

But last week President Joe Biden said the U.S. Intelligence community had “coalesced around two likely scenarios,” one of which was the likelihood that the virus escaped during a laboratory accident in Wuhan. Biden gave the intelligence agencies 90 days to carry out another probe to “bring us closer to a definitive conclusion.”

However, the president’s characterization of the findings did not suggest the same level of conviction as that of the Trump administration.

Biden’s announcement followed a CNN report that his administration halted a State Department investigation launched late last year into whether the coronavirus originated in a Chinese lab.

Not long after Biden made the announcement that our nation’s intelligence agencies would once again be checking into the matter, Pompeo spoke with Fox News and said that he was glad the administration was finally coming around on the lab leak theory.

“What I can say for sure is this: we know that they were engaged in efforts connected to the People’s Liberation Army inside of that laboratory, so military activity being performed alongside what they claimed was just good old civilian research,” he stated. “They refuse to tell us what it was, they refuse to describe the nature of either of those, they refuse to allow access to the World Health Organization. That cover-up alone suggests that there’s a lot more that we need to know.”

The Chinese government has, of course, denied this theory vehemently, though British intelligence services have said the theory is still feasible.

A source who is close to the investigation conducted by the United Kingdom stated, “There might be pockets of evidence that take us one way, and evidence that takes us another way. The Chinese will lie either way. I don’t think we will ever know.”