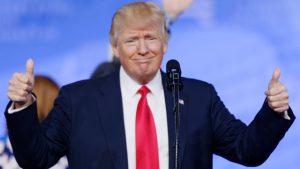 Former President Donald Trump recently stated that the only negative aspect of running for president in 2024 would be that his candidacy would likely save news network CNN.

And, to be honest, he’s absolutely correct.

Trump made these comments during an interview he had with Fox News host Greg Gutfeld. Several excerpts from the interview were aired on Gutfeld’s program on Thursday.

Gutfeld pointed out that if Trump ran again, it would likely rescue CNN from low ratings.

“They don’t like to cover Afghanistan. They’re torn because if they cover it they will get higher ratings. But they don’t want to cover it because it’s bad for the radical left Democrats. And they’re doing that to protect some of the most incompetent people in history of politics,” he continued.

Trump consistently slammed CNN during his four years as president. At one point, he even floated a lawsuit threat against the news network over alleged bias.

During his interview with Gutfeld, he said the mainstream media refuses to acknowledge rising crime in America’s cities.

“Look at Chicago where they say 113 people were shot at and 28 died,” he added. “That’s worse than Afghanistan. We didn’t lose, I told you, a soldier in many, many months and here they have 28 people died over a weekend? It’s a disgrace what’s going on.”