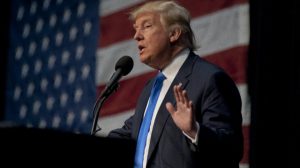 Former President Donald Trump stated on Monday that he believes Biden and his administration’s policies on the border are “destroying the country” and leading to unnecessary deaths and other forms of suffering.

“We’re bringing the violence to our country, because many of the people coming in are not non-violent people,” former President Trump said during an interview with Fox News’ Harris Faulkner. “They are violent people … these countries don’t send out their finest and in some cases, I’m sure you have wonderful, fine people, but you also have criminals, you have murderers, you have sex traffickers, you have a lot of very bad people coming into our country, and they are doing nothing about it.”

The Biden administration announced on Sunday that it will let immigrants go free into the United States pending their court appearances, said Trump, and “it is crazy.”

“They are destroying our country,” he said. “This is just like with the vaccine where they say let’s blame Trump. We had record positive numbers and frankly in another couple of weeks we could have finished up the wall. They ended construction and the only reason it didn’t get finished (was because) it took me 2 1/2 years to win the 11 lawsuits that we had, many of them by the Democrats in Congress.”

But in the parts of the nation where the border wall has gone up, “it has been incredible,” said Trump, but there must be some entry points to allow workers to enter the country, he stressed.

“You have people coming in helping the farmers,” Trump said. “They’ve been coming in for years. If we ever stopped that with our farmers, the farmers would go out of business in California, wine country, various other places. So you take them in. But what happens is you do have some open points because obviously, we have people coming back and forth. But you also have in some cases areas which weren’t completed like gate areas and other areas which would have been completed very quickly. You could have had it done in a month.”

Trump later went on to call for DHS Secretary Alejandro Mayorkas to step down from his post, saying that he is in “way over his head.”

“All he had to do is sit down in his chair,” the president stated. “The systems were taking care of themselves. We had great people there. A lot of those people were removed. The policies were removed. We had ‘stay in Mexico’ because what happened is hundreds of thousands of people were coming into our country. Our laws were so bad. We had to change and get things changed.”

Too bad that matters to them far more than their own people do.