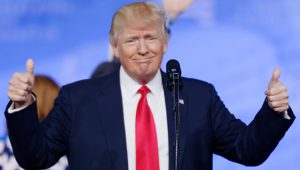 Former President Donald Trump stated that he was “surprised” and “very appreciative” of President Joe Biden thanking him and his administration on Tuesday for the success they had in getting the COVID-19 vaccine developed.

“I’m very appreciative of that — I was surprised to hear it,” Trump said during an interview with Fox News. “I think it was a terrific thing, and I think it makes a lot of people happy.”

Biden put on a press conference where he announced increased coronavirus testing capacity and expanded access to vaccines and support for hospitals across the United States as cases surge due to the omicron variant.

“Thanks to the prior administration and our scientific community, America is one of the first countries to get the vaccine,” Biden said during the press conference. “Thanks to my administration, the hard work of Americans, we led a rollout that made America among the world leaders in getting shots in arms.”

Trump told Fox News that Biden’s words could be helpful in the fight against COVID-19 because “tone” and “trust” were important in getting Americans vaccinated.

“I think he did something very good,” Trump went on to tell Fox News. “You know, it has to be a process of healing in this country, and that will help a lot.”

The Trump administration’s Operation Warp Speed, a public-private partnership, helped lead to the Food and Drug Administration approving emergency use authorizations for the Pfizer-BioNTech and Moderna COVID-19 vaccines in less than a year.

“This is a great thing that we all did,” the former president told Fox News. “I may have been the vehicle, but we all did this together.

“When we came up with these incredible vaccines — three of them — and therapeutics, we did a tremendous job, and we should never disparage them. We should be really happy about it because we’ve all saved millions and millions of lives all over the world,” he continued.

Trump, who had the coronavirus during the fall of 2020, stated on Sunday that he received the COVID booster shot.

The omicron variant has contributed greatly to a national surge of COVID-19 infections. The Centers for Disease Control and Prevention announced this week that omicron comprises 73% of new COVID-19 cases in the U.S.

Trump once again stated that he is totally against vaccine mandates.