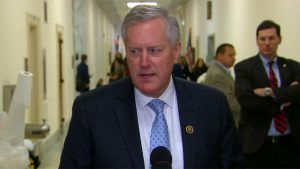 The January 6th committee in the House, which is investigating the riot that took place at the U.S. Capitol at the beginning of the year, stated on Tuesday that former chief of staff Mark Meadows, who served under former President Donald Trump, has agreed to provide the panel with records and to make an appearance “soon” for a deposition.

“Mr. Meadows has been engaging with the Select Committee through his attorney. He has produced records to the committee and will soon appear for an initial deposition,” Democrat Rep. Bennie Thompson, who is currently the chairman of the House select committee, went on to reveal in a statement.

Noting that the panel expects all witnesses to provide all the information requested and that it is lawfully entitled to received, Thompson added: “The committee will continue to assess his degree of compliance with our subpoena after the deposition.”

Trump has urged associates not to cooperate with the committee, calling the Democrat-led investigation politically motivated and arguing that his communications are protected by executive privilege, although many legal experts say that principle does not apply to former presidents.

On Jan. 6, protesters stormed the Capitol in a bid to prevent Congress from formally certifying Trump’s 2020 presidential election loss to Democrat Joe Biden.

At this point, it really seems like the Democratic Party is just using what happened on January 6th as a tool for painting up anyone who supported Trump, which in the eyes of the mainstream media means anyone who claims to be conservative, as a dangerous right-wing domestic terrorist.

This, of course, isn’t true, but the left has become notorious for underhanded tricks used as political weapons.